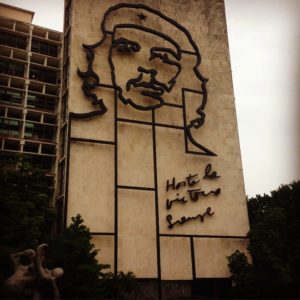 Surprisingly, Cuba has one of the best health care systems in the developing (and developed) world. It has the third highest doctor patient ratio, high life expectancy and low infant mortality. This due to government funded health care that focuses on education and prevention rather than cure. They’ve achieved admirable results. But… there is a big but when it comes to medical care in Cuba. One that I discovered on a recent visit to Havana.

On a family holiday with three young kids it was inevitable that someone was going to get hurt. We were staying in the beachside resort town of Tulum in Mexico (in a rather luxurious villa thank you very much) when a little game of chasey resulted in my daughter tripping over on the gravel. After a little sulking, lots of cuddles and few well-placed Mickey Mouse band aids she was on back chasing after her cousins again.

A few days later she woke me in the middle of the night complaining that her arm was hurting. She then casually dropped her head onto the pillow and went straight back to sleep. She’s not one to complain so I thought it was odd and warranted closer inspection in the morning. By morning her little scratch had turned into a rather fiery and pus-filled infection site. Between eight of us we were able to scrape together some baby ibruprofen to calm the throbbing in her arm, but what we really needed was some antibiotics.

Armed with no Spanish and an adult version of the medication we wanted my father (a trained GP) and I visited the local Farmacia. There was an impressive display of ancient bottles and potions on display which was promising. But our hopes were quickly dashed when we showed the medication to the pharmacist. She just shook her head and told us they had nothing like this available.

To clarify, we weren’t after anything special, just some penicillin to help stop the infection. We were returning to New York in two days, so we just needed to make sure her arm didn’t get any worse until then.

The pharmacist told us to visit the “International Pharmacy.” It certainly sounded promising but after a little exploring we were disappointed to find a little shop no larger than a cupboard. Behind the cramped desk were a few shelves that were rather sparsely stocked with a random array of modern medications. The pharmacist looked at our antibiotics and again shook her head. They didn’t stock that either.

Thankfully she was able to offer us another syrup for children that my father believed would suffice for a few days. Smiling the pharmacist put it in a paper bag and then asked for CUC$25, the equivalent of US$25. Of course I’d pay anything for my daughter’s good health but US$25 for a medication that would cost no more than A$5 made me feel like I had been mugged.

While Cuba may have one of the best health care systems in the world, the American trade embargo has come at a significant cost to their population. The restrictions that have been in place since the 1960’s have meant that the cost of importing life saving medicines and equipment has been prohibitive. Initially Cuba was able to bypass the export restrictions by purchasing from foreign subsidiaries of US companies but this was banned in 1992. Without the government footing the cost I doubt that the average Cuban could afford the treatments they require. After all, you can have as many excellent doctors as you want but if they don’t have the necessary equipment to perform their job they may as well have their hands tied behind their back.

This all got me thinking. While Havana is a fascinating place to visit, what makes it so quaint and charming is the fact that it’s progress has been halted. It’s like stepping onto the set of Happy Days. Everyone drives around in grand old Chevrolets and Buicks that have been dressed up in bright colours. The architecture is a dazzling array of vibrant buildings with beautiful old world features. And then there’s the bars and restaurants. The faint smell of Cuban cigars is etched into the dark wood panelling and velvet seats. It’s all charmingly old-fashioned.

But when you look a little closely you can see that people are struggling. Cradling some rum straight up while watching a local band move like only latinos can, it was easy to be drawn into thinking this is how the locals really live. But then I looked outside and saw about twenty men of all ages peering in, desperate to catch a glimpse of the baseball match that was playing on a television in the corner. They couldn’t come in, and they would rather stand on the street than go home. I can only assume, like penicillin, there was no ESPN at home.

As a tourist I would love to see Havana maintain the old-world feel and funky art scene that has emerged as a result of its isolation. But for the sake of its people I hope it can progress where it matters.