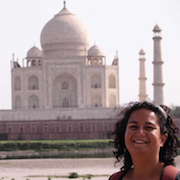 I am a Melbourne girl of Indian origin. After completing degrees in Law (with Honours), Commerce and Management, my career followed a rather traditional path for 16 years. I worked in a challenging and rewarding corporate career for some of Australia’s best known brands (like Foster’s, General Motors Holden and ANZ Bank).

In 2011, I was in my mid-30’s, single and had been through some challenging times personally, so I decided it was time for a change and chose to leave Australia and move to India.  I was granted Overseas Citizenship of India, which means I can live and work in India forever.

First I took a holiday, and backpacked across the country for 10 months, blogging about it here. Whilst I travelled, I started receiving offers to write for online publications, and I also took up my first consultancy assignment with an Indian start-up.

I settled in Mumbai in 2012, and lived and worked there for almost five years. In 2016 I decided to return to Australia and set up a niche content marketing agency called Legal Writers. I also still freelance as a writer from time to time, you can see my latest writings here.

What I Write About