Navratri is a Hindu festival that means 9 nights and is a celebration of the Goddess Durga as Autumn begins (at least in very simplistic terms).

For me growing up in Australia, Navratri was the time of year we gathered together in a school hall with other Gujarati families and did Dandiya Raas.  This is a dance, usually done in a circle with a partner and pair of wooden sticks (Dandiyas).  I have such fond memories of the clicking sound of the dandiyas, and the gracious twirling of my colourful and sparkling chania choli.  I honestly can’t remember the last time I went to a Navratri celebration, so was a bit excited at the thought of being in India during the festival.

However, it became quickly apparent to me that I had timed my travels badly.  During Navratri I was in the states of Uttarakhand and Madhya Pradesh.  When I enquired with locals about where to go for dandiya raas they just looked at me blankly or laughed.  In Rishikesh, my yoga teacher Upendra just smiled and said “Only your people do that”. What he meant was the dandiya raas is a Gujarati tradition and is rarely found elsewhere in India. Evidently, there are insufficient Gujarati expats in these states to carry on the tradition there.

To be honest, I felt a bit short-changed.  My first Navratri in India and it didn’t really feel like anything at all.

Then I landed in Orchha.

The day I landed in Orchha was the tenth day after Navratri, Dussehra. This tiny town had a platform set up in its main street for music, and there were some small daises set up for the worship of the Goddess Durga. On each dais was an effigy of Durga for people to pray to.

Then the trucks started.

Firstly it was just one or two, but as the day progressed it became a constant stream.  Each truck had a Durga statue and was filled with men and boys, dancing, throwing pink powder and pumping out music full blast. 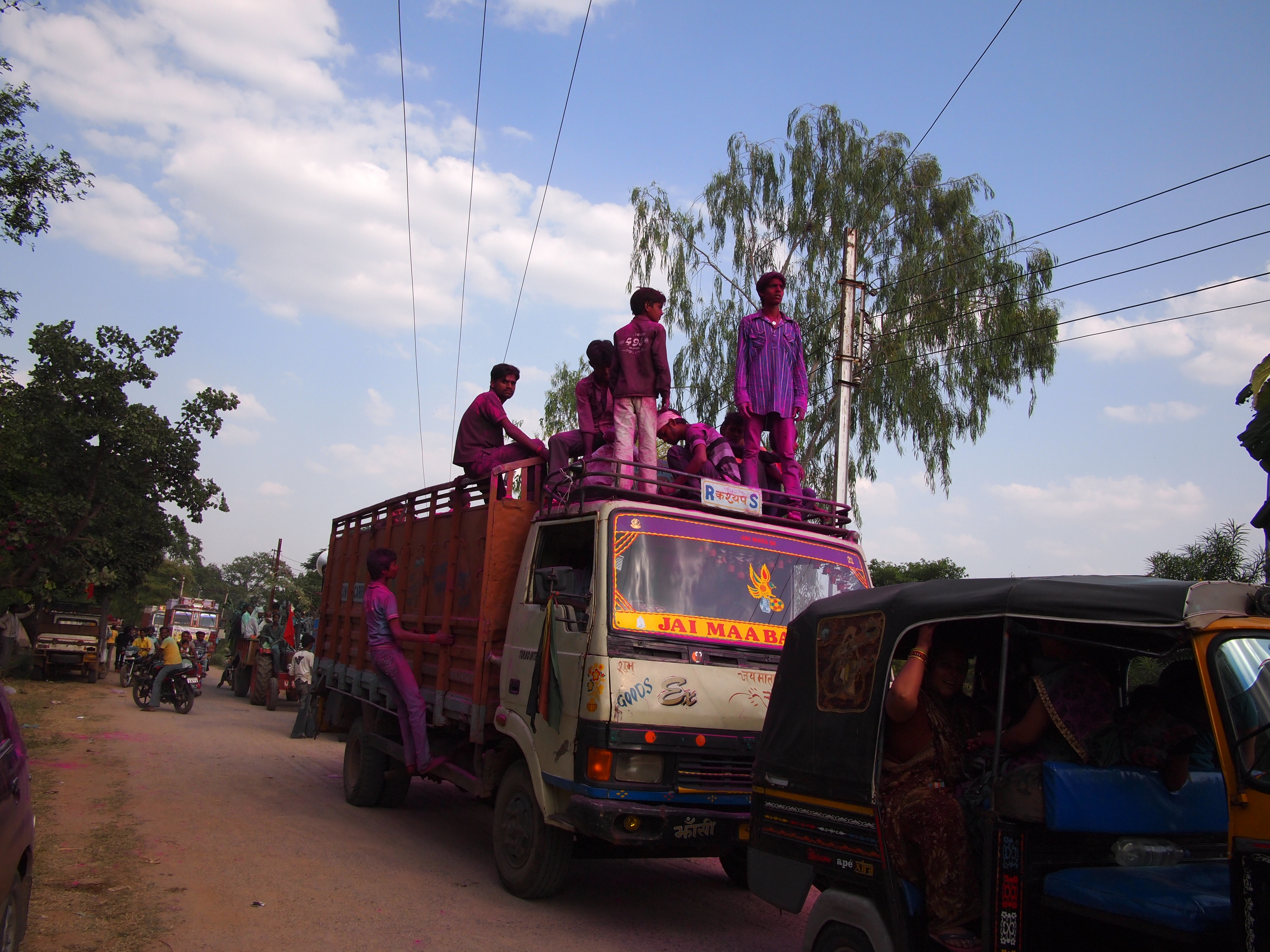 The trucks coming into town

The trucks were all heading towards the river. At the edge of the river they stopped, whistles blowing and crowds trying to direct the traffic so that more trucks could get in and others could get out.  It was chaos, completely organised chaos as India seems to do so well. 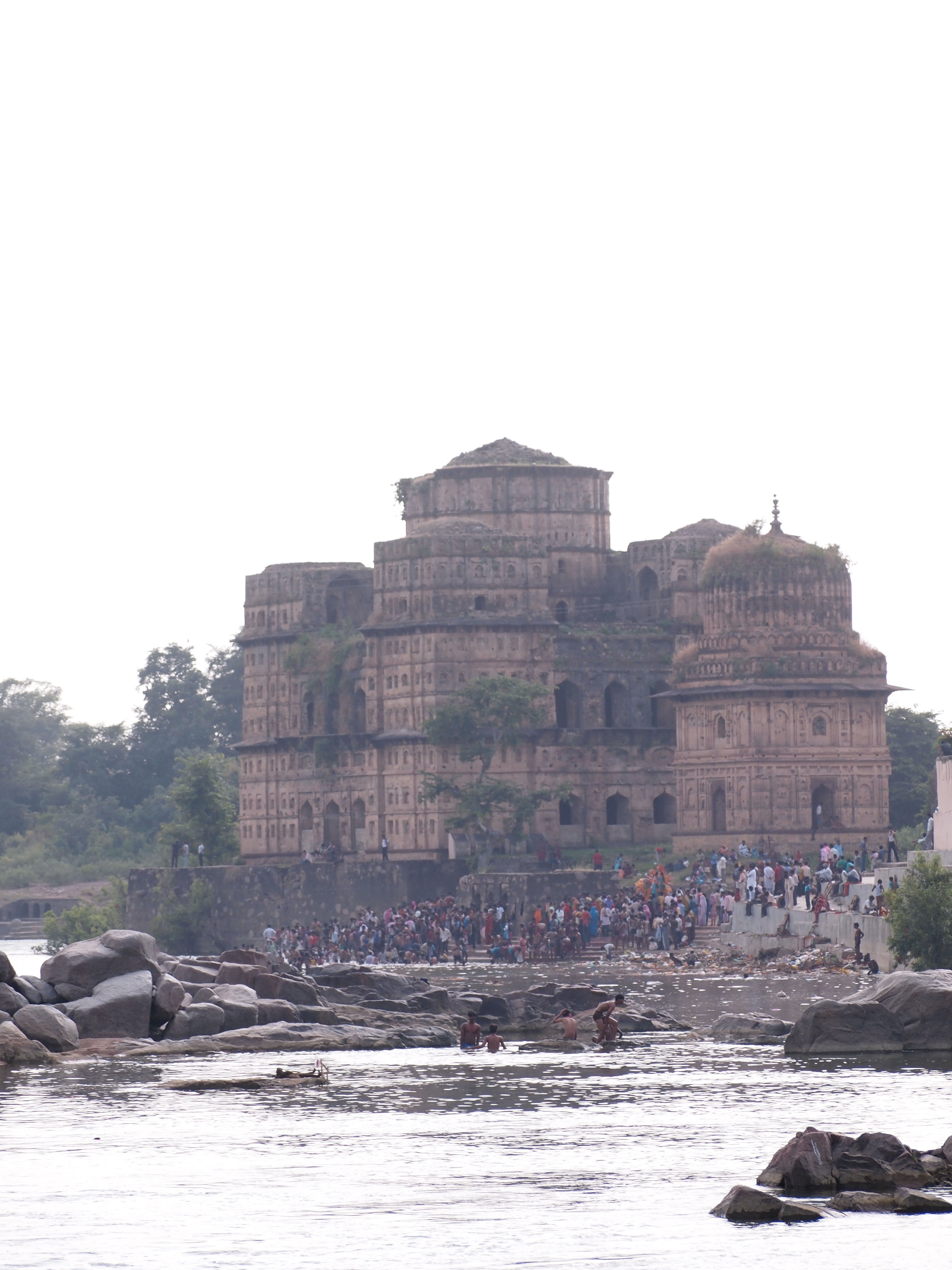 The crowds on the ghats of the Chattris

Each truck emptied, and the men carefully carried their precious cargo towards the river. 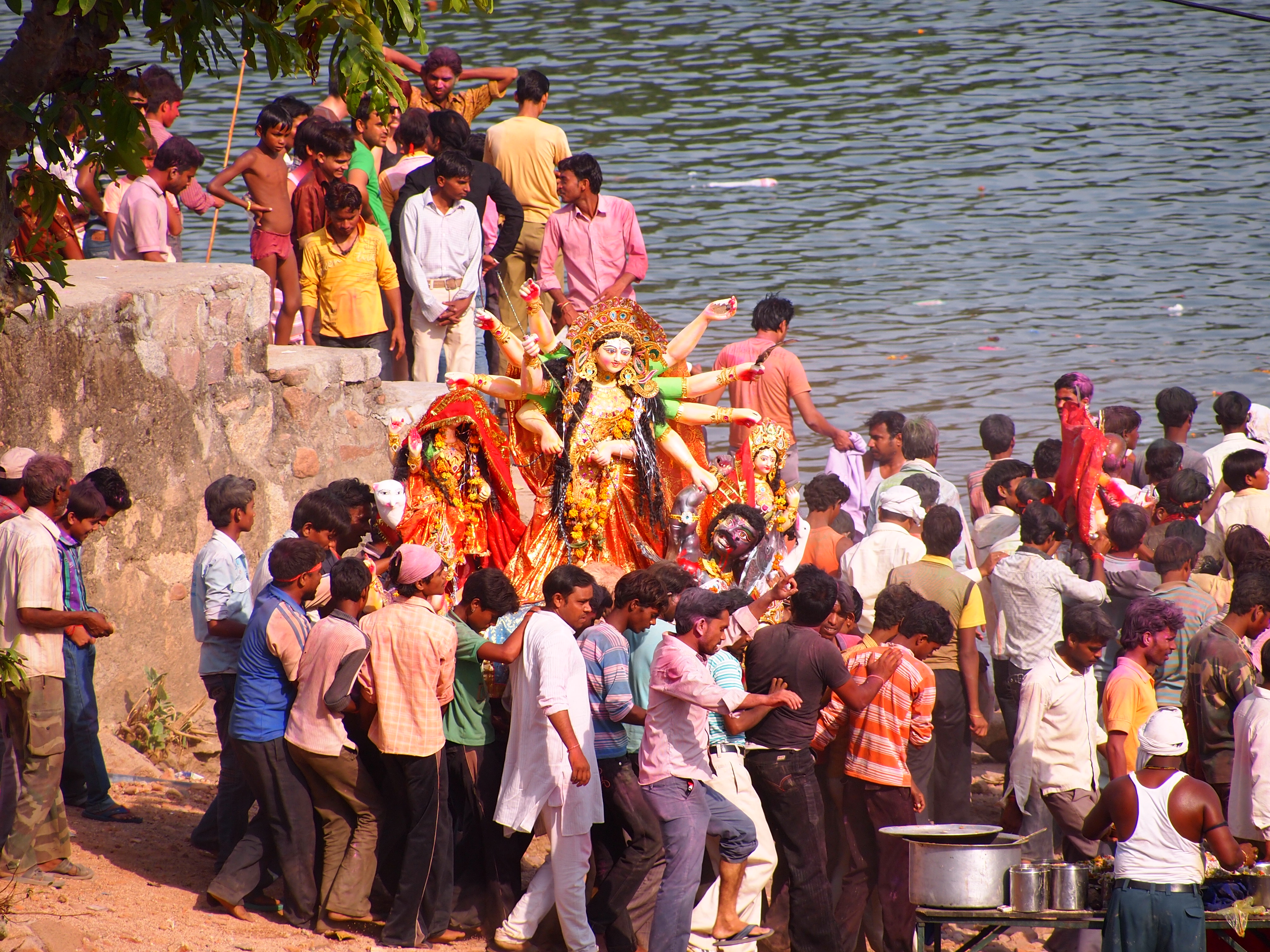 Carrying Durga to the water

Once at the river, it was time to strip down to underwear and pray as Durga was prepared to be submerged. 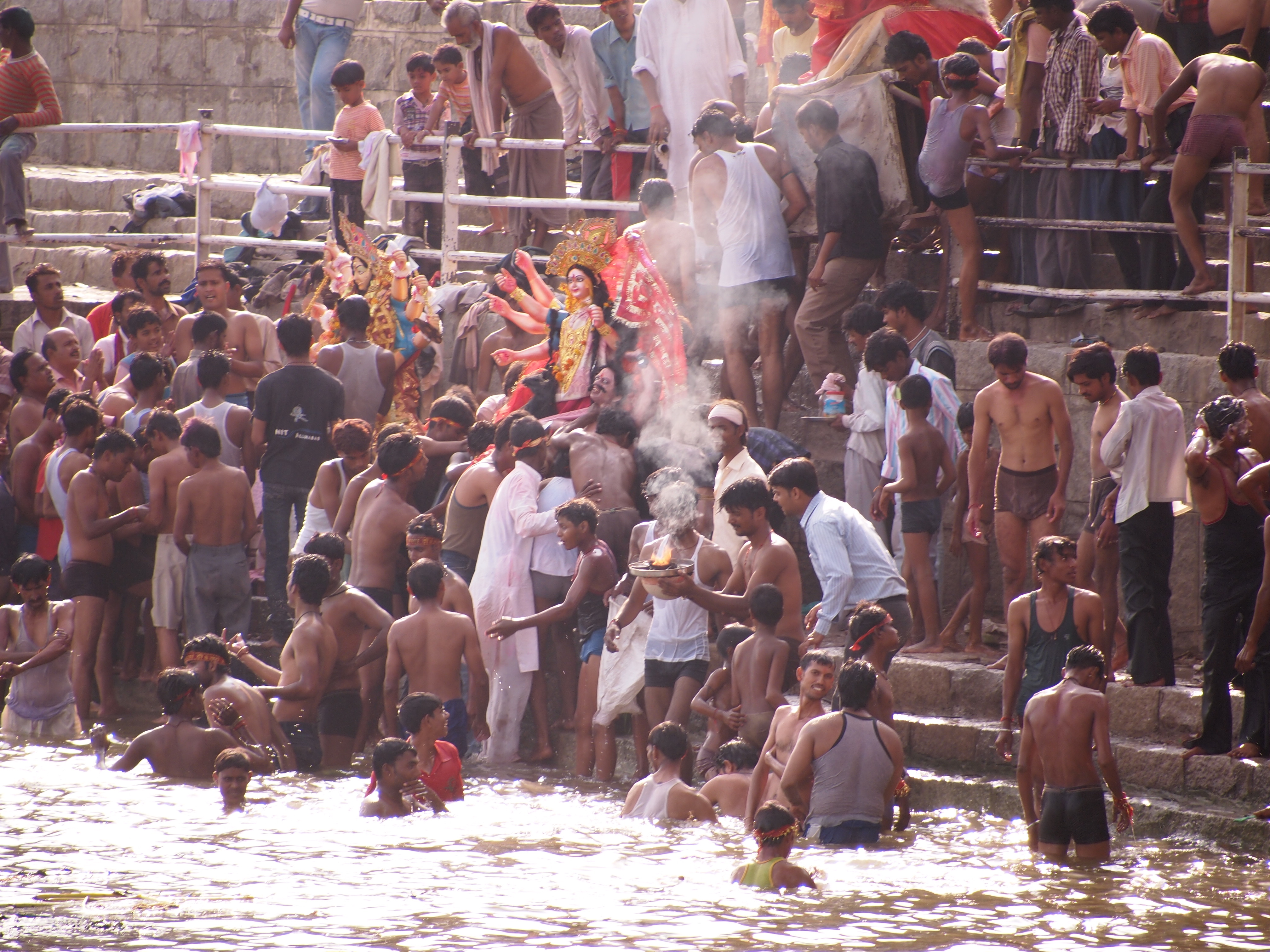 Aarti as Durga is brought to the water

The effigy was then carried into the water by a few men and submerged. 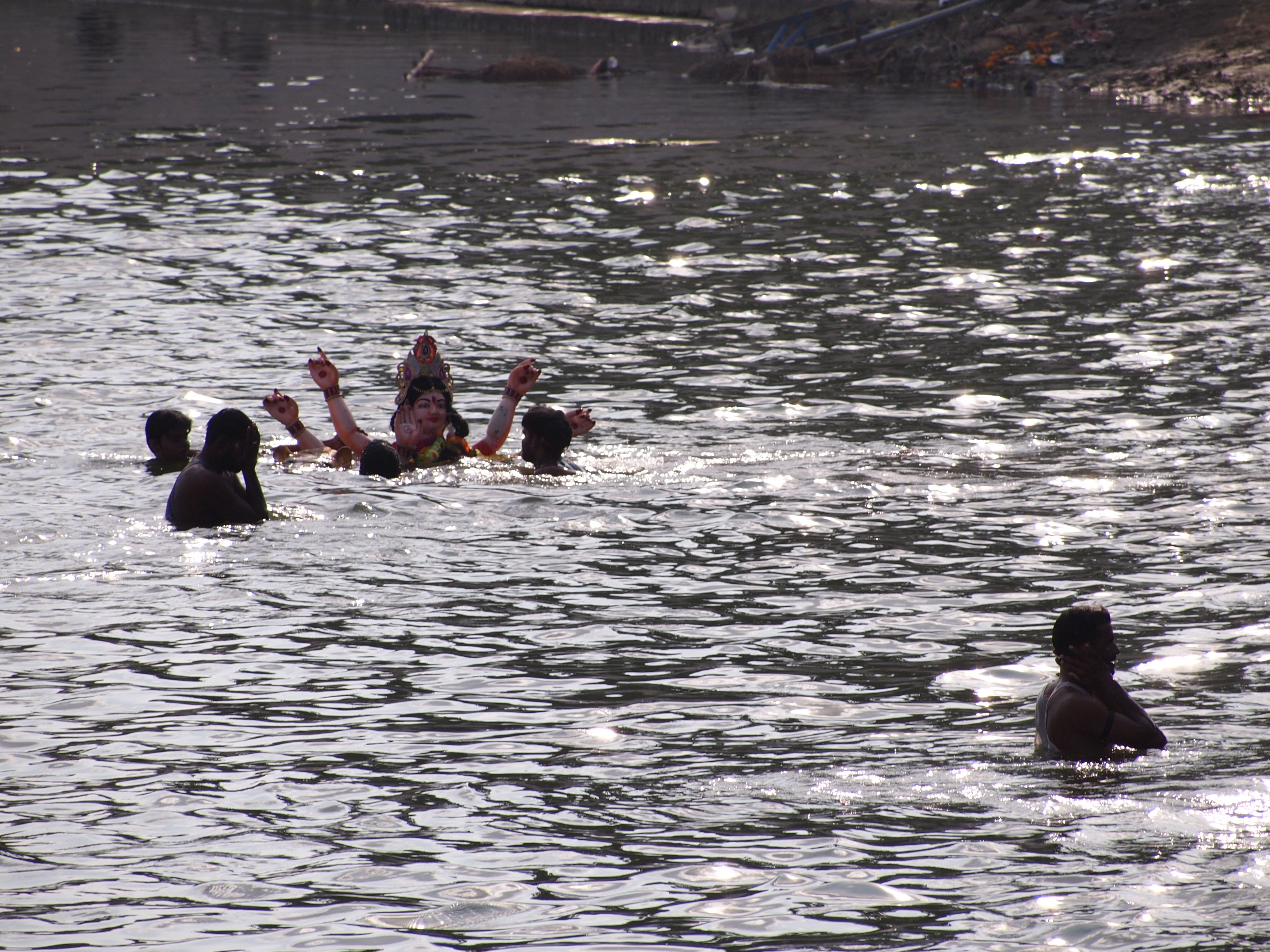 Once completely submerged, the effigy was left to wash itself downstream, transforming the pristine Betwa River into a bed of rubbish. 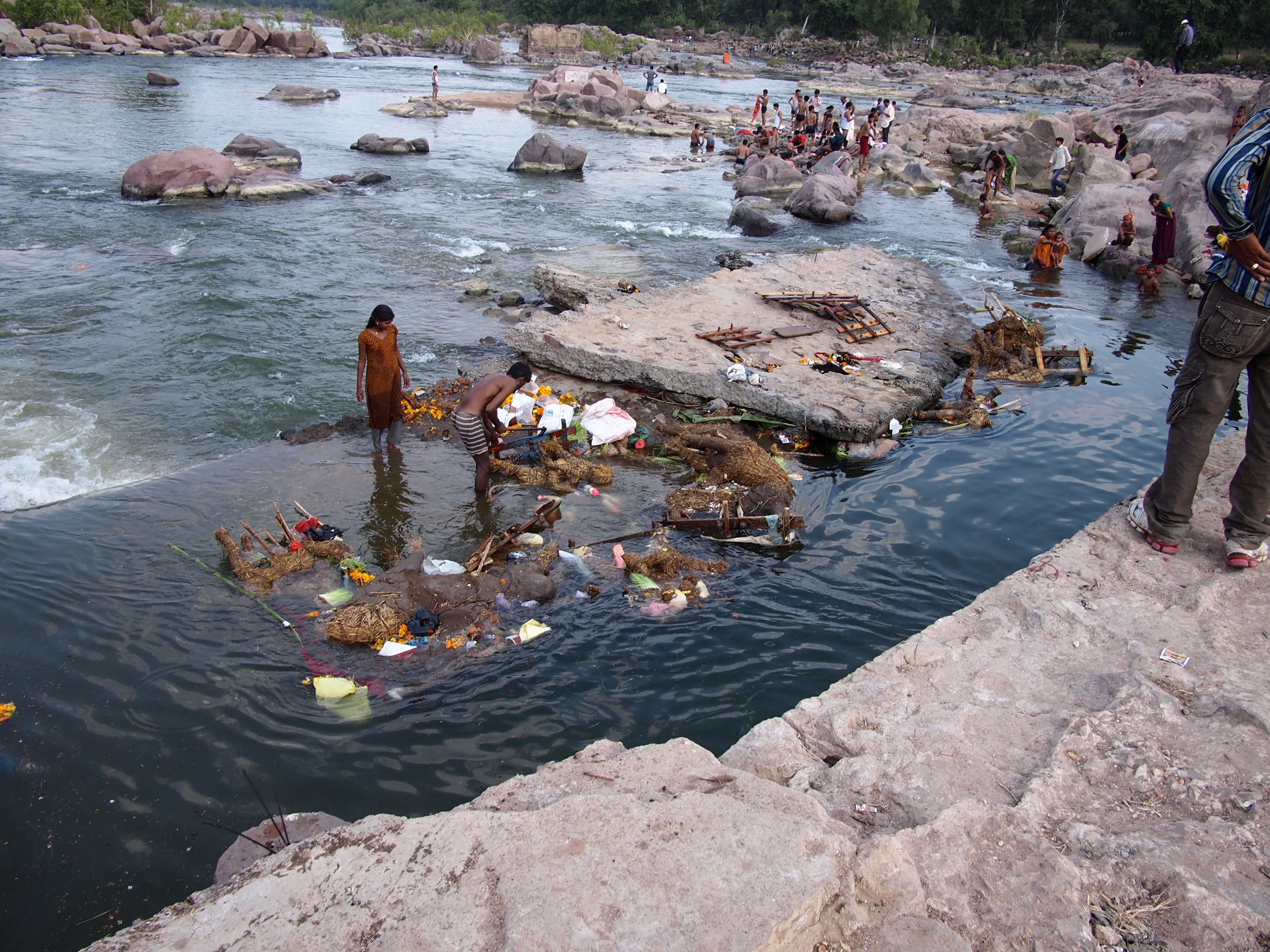 The aftermath of the ceremony

What made this ceremony unusual, is that in most places Dussehra is celebrated by burning effigies of Ravana (the demon who is defeated by Lord Rama), as a symbolism of burning away the evil within.  Here in Madhya Pradesh this was clearly not the case.  The focus was on Goddess Durga and returning her “home” to the waters.

Whilst I have attempted to research the meaning of this ceremony, and understand why it differs from the burning ceremonies held elsewhere, the intricacies of Indian culture are so detailed and regional, it has been challenging to find a sufficient explanation to this ceremony merely from researching the internet. Unfortunately, my knowledge of the local language is still insufficient to be able to discuss and fully understand this ceremony and it’s meaning with the local people.

Regardless, this is what I observed, Dussehra Madhya Pradesh style.