This week I participated in a campaign by BuzzFeed where people explained why they felt feminism was relevant to India. Now anyone who’s read my blog for a while knows that I believe feminism has a long way to go here. So when I saw a call-out for people willing to participate in this campaign I was more than happy to lend my time. 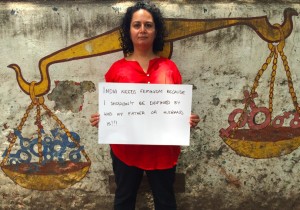 My message was based on my personal experience here in India as a single woman. Every single time I have to a complete a form, whether it be filing a tax return or getting a bank account I am asked to name my father or husband. As I’m not married, my father (who has never lived in India by the way) is listed on most of my formal documents. It’s absurd!

The insinuation is clear though. A woman cannot be single and independent. She is either single and under her father’s control, or married and under the control of her husband. As a woman who doesn’t fit either of these descriptions, I am constantly asked intrusive and sometimes offensive questions about my marital status, how I survive without a man and why on earth I have chosen to live this way.

Some people treat me like I’m a child, because without a man in my life to show me how to function I must be juvenile. Others treat me with a form of rather obscure fascination. While it isn’t my friends who behave this way obviously, it’s almost everyone else. From my maid who finds it fascinating that I don’t have a husband, to the woman who runs my local grocery store and believes it is her right to ask me a range of intrusive questions about my personal life.

I’m not a freak of a nature. I’m an independent woman  who has managed to survive and thrive in a country that is currently designed to watch me fail. But things here are changing quickly, hopefully it won’t be long before I’m no longer a rarity but rather an accepted and normal part of society.

This is why I believe India Needs Feminism. Why do you?