I’m pretty sure this post isn’t going to win me some friends in the travel blogging space, but something happened yesterday that just infuriated me so much I felt the need to write about it. I put a photo on my personal (private) FB page and one of my “friends” (although not now as I’ve unfriended them) posted a comment on it. My post was about this poster 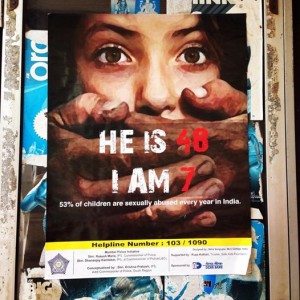 If you can’t read the fine print it says “53% or children are sexually abused every year in India”. That statistic would shock even the coldest person. For every two kids you see in India, chances are one of them has been touched by someone this year. What appalled me was this “friend” made the comment “these things don’t just happen in India”.

This remark was designed to deflect the issue away from India. I know because I’ve watched this person’s behaviour for a very long time. The person who wrote it is a very well known travel blogger who waxes lyrical about the beauty and wonder that is Mother India and rarely mentions anything about the harsh realities of the country. Where others have tried to point out social issues that exist in India, they have actively defended and deflected the issue, covering up like someone carefully hiding their tracks. I’ve followed their writings for several years now and have always found it beyond irritating, this post just pushed me over the edge. You see this writer has never actually lived in India, they come once every couple of years and then go back to the safety and comfort of their western life, and write romantic posts about what life is like in India. Worse still, they have called themselves an India Travel Expert and people believe them. I believe it is this that drives them to cling to a romantic ideal, after all the tourism boards won’t be covering their travel if they speak ill of the country.

Don’t get me wrong, this isn’t a case of sour grapes. I have no desire to be known as an expert on travel in India, even though I am one by default. I’ve learned first hand how poorly paid and restrictive travel writing is as a profession to know that it’s not something I want to do full-time. Any travel blogger who tells you they are living the life they want on what they earn from their blogging activities is most likely leaving out some major facts. All those trips that they get sent on, usually come with a long list of restrictions and chores that must be completed in order to “earn” that free flight. Some beg airlines and hotels to cover them, and even have the audacity to get angry when they are refused or asked to work for their keep.  I have no desire to be told how I should travel and what I should see by anyone, so I choose to not make a living from travel writing. I do still pitch and write for publications, but I’m selective about who I write for and what I write on. When I write about travel now, it’s almost entirely for pleasure and I am grateful for that.

Anyway, I digress. So this “India Travel Expert” tried to tell me that a figure of child sexual abuse of 53% is common around the world, not just in India. I wasn’t talking about other countries in my post, I was talking about India so I don’t believe it’s relevant to mention other countries, but I’m sure there would be a national outcry if that was the official statistic in Australia. Seriously, can someone be so delusional and wedded to the idea of maintaining a facade about a country that they have to belittle such despicable acts?

What angers me the most about this situation, is that people believe what this person writes about India. So when they talk about female travel in India, women listen. But I am certain that they aren’t telling the whole truth because I’ve read their posts and stories of being stared at, photographed incessantly, poverty and the abuse of the environment are missing, as they don’t fit in with the India they have created for their audience; the romantic place where peace, love and mung beans rule. I’ve read their travel tips, which are superficial and provide no real practical assistance to a first time traveller, because to state the truth would mean you’d have to admit to some of the challenges of travelling in India and perhaps the social problems as well.

Now I can already hear the comments. I’ve been called an “India Hater” by some, while others have criticised me for writing too positively about India. I just say what I think. When it comes to India I have a love hate relationship. I’ve lived here for more than 3 years. I’ve been to about 98 cities and towns in this country and visited 18 States and Territories alone. I haven’t seen it all, but I’ve certainly seen more of the country than almost anyone I know.

I love India for its beauty, colour and chaos. I hate it for its corruption, class system and poverty, but I still live here because this is exactly where I want to be right now. I get so much from living here, humility, challenge and personal reward to name a few. I’m grateful that I’ve been able to live here, but I won’t sugar coat India so that a western audience will think I’m an India Travel Expert because I’m reinforcing a romantic ideal.

There are harsh realities in a country like India, in case you forgot, 53% or children are sexually abused every year, not to mention about 103,800,000 people lack safe drinking water; they can have a sip of water and die from it. This is another appalling statistic and India has many more.

But I don’t need to read statistics to know there are serious issues here that need to be addressed. I just walk outside my front door and watch toddlers defecating in public into the gutters, the cows on the street eating garbage that has been dumped in a children’s playground and the family that sleeps under a flimsy piece of plastic tied over the footpath in the middle of monsoon. I also see the temple across the street that is an artistic riot of colour, the whole neighbourhood dancing and singing as they carry their Ganpati to the ocean and the vegetable seller who smiles at me with what I want ready in hand before I’ve even reached his stall. This is India and I live in her, all of her.

While there are good Indian travel blogs out there, ones that tell it how it is and don’t pander to the whims of marketing and PR professionals, I’ve taken a look at quite a few today and noticed that most gloss over some of the realities of the country or their life in one way or another. That may be their style of writing, but is it really doing a genuine traveller any good? I guess it is if the reader wants to escape reality, and for many who read stories of travel in search of escapism, then it’s perfect.

For me, I read travel blogs usually when I’m trying to find out information  about where to go or that will make my journey easier or more informed. So I want the truth, all of it in all its guts and glory. I am asked often by people to provide advice and guidance on travelling in India and offer it willingly. Most of the feedback I receive is about how useful and honest my advice was, and how it prepared them for India in a way no other guidebook or blog had. I take this as a compliment.

So be wary when you read a travel blog about India. If it sounds like a place that is perfect, spiritual and too good to be true, it probably is. If it sounds real, inspiring and challenging all in the same breath, then that’s likely to be closer to the truth. If the writer has never written anything about the challenges of travelling around or getting something done, then I’m guessing there are omissions in their stories.

I think I’ve avoided being a real “travel blogger”, I don’t usually write lists of what to do and what not to do, but I think now it might be time.  It’s time because I want to help people who come to India to travel, to actually feel equipped to see everything this country has to offer. So I’m going to write a few posts about travelling around India (as a solo woman to boot) and what it’s really like, and what things might be useful to know as you do it. I’ll put these together over the next few weeks, including some handy tips and real experiences.

If you have anything in particular about travel in India that you’d like me to write on, or tips of your own that you would like to add, please comment here and I’ll include them.

What are my credentials you ask? I visited India 7 times for both work and pleasure, and then backpacked across the country solo for 10 months. I’ve lived in the country for over three years as a single woman and have supported myself without family money or an expat package. That’s it!

Whether or not you want to believe what I have to say is up to you, after all I’m just another travel blogger!

28 thoughts on “Peace, Love & Mung Beans: Should You Believe that Travel Blog About India”