Old London town has to be one of my favourite cities in the world. I’ve been there so many times now, it feels like a second (or perhaps now third) home. I’ve always a had a lot of family there, and have a bedroom in one of my cousin’s homes, which always makes it such a welcoming place. Given that I was on my way to New York anyway, it made sense to have a stop over there for a few days.

As I’ve done the traditional sights of London several times over in years gone by, I didn’t feel the need to visit the Queen or wander the hallowed halls of Westminster Abbey this time around. Instead, much of my time was actually spent in the suburbs of North London visiting family. I have no less than 6 of my parents siblings in London, and more cousins and their offspring than I can count, so there were plenty visits to be made and cups of tea to be had.

One of my favourite parts of this trip was spending time interviewing my father’s second oldest brother. Now in his late 80’s, his long-term memory is still remarkably sharp, and I wanted to take advantage of this while I could. It was partly out of personal interest and partly research for a semi-biographical novel that I’m sketching out at the moment. So over two days we spent hours going through his memories of family history; starting with that of my grandfather in India long before either of us were born, through years of migration back and forth between India and East Africa, and the traumatic expulsion of the family (along with all Asians) from Uganda in 1972. We discussed the subsequent years of displacement and finally settling in new and unknown lands. It’s a fascinating journey and one I hope I can do justice to in the coming years.

I did manage to do a little bit of exploring in London town as well, but in a much more relaxed and experiential way than I had done in the past. Rather than visit Trafalgar Square, I met up with a couple of old work colleagues at a rooftop bar that over looked the landmark. With Trafalgar Square in the forefront and the London Eye and Big Ben in the distance, we laughed about the past and watched the sun set.

The London Eye and Big Ben

Wandering out each morning for a brisk and rather refreshing walk, I enjoyed crunching the autumn leaves beneath my feet. Such a small joy, but one that I haven’t experienced since moving to India, I’d forgotten how glorious a season it can be when you’re surrounded by deciduous trees. 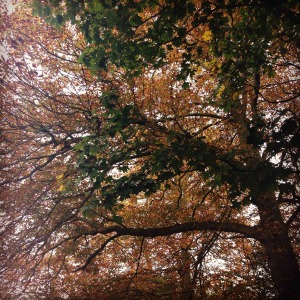 Of course I had to experience one culinary adventure while I was there, and chose Heston Blumenthal’s Dinner in Knightsbridge. While I would have loved to have visited the Fat Duck, unfortunately time and budget didn’t permit this time, but you can read my review of the meal. The lunch special was fabulous and well worth doing if you’re in London even for just a short time, you can find my full review (and yes photos worth licking your screen).

After lunch, I wandered through the blur of designer stores in Knightsbridge until I reached the historic Victoria & Albert Museum (or the V&A). Over the years I’ve seen a lot of great museums in London, but for some reason or another had never made it to the grandest one. Set in a stunning building it’s worth visiting just to see the architecture. Thankfully the English have long appreciated the joy of art, and therefore access to much of the museum is actually free to the public. There was a fascinating exhibition on about social demonstrations throughout the world called Disobdient Objects, alongside Rodin sculptures, a gorgeous Japanese section and a photographic exhibition by Horst, who was famous for his photographic contribution to fashion and in particular Vogue magazine.

My exploration of London this time was nearly at an end, but not before taking in a show at the infamous West End. We chose to see War Horse which had been showing for over 5 years. The story itself is not all that remarkable, but what makes War Horse interesting is the puppetry. Without giving it all away, the story is set around a horse, and the animal (amongst other animals) is brought to life on stage through life-size puppets that are controlled by the actors. What makes this spectacle so fascinating is that you can see the actors, so watching the show is like experiencing the inside workings of puppetry. I found it quite insightful to watch, and give plenty of credit to the actors who certainly honed their skills, despite the fact that they were essentially playing second fiddle to a horse.

And almost as a quickly as it started, my visit to London ended and I was on my way to my next destination… New York city was awaiting me.