At Dinner by Heston Blumenthal in London’s fancy Knightsbridge, they offer a lunch special that is great value at 3 courses for GBP 38. I’m always a fan of a bargain and have long been fascinated by watching Blumenthal’s molecular gastronomy on Masterchef, so I wanted to see if his food lived up to its potential. With two Michelin stars, it certainly had a lot to live up to.

The premise of the restaurant is to serve traditional English cuisine from the past, with a modern twist. So each dish on the menu has a note of what era it is from, and the menu itself is annotated with references of cookbooks where the original recipes were found.

For starters I had a Pressed Octopus Salad (circa 1730) that was incredibly delicate, and went well with the small droplets of pickled lemon jelly that surrounded it. It was served with a salad of fennel and flavourful pea shoots.  The dish was surprisingly subtle but satisfying to taste. My cousin (who happily came along with me) had the Tomato Salamagundy (circa 1720), simply a salad where the heirloom tomatoes were the star; I had no idea that the humble tomato could taste that good! They were balanced perfectly by a smoked goats curd, drops of basil jelly and leaves of celery and cicely.

For mains we both had the Roast Cured Salmon (circa 1850) which was perfectly cooked. The beetroot puree that acted as its sauce, was the highlight of the dish, it was ever so smooth with a gorgeous smoky flavour. This was offset with the tang of pickled candy beetroots, parsley and fresh green sea vegetables that complemented the richness of the dish. 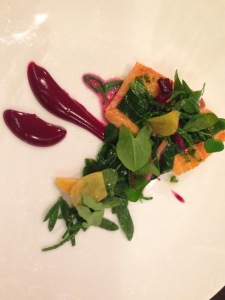 As its name suggest, the Millionaire Tart (circa 1730) was a decadent affair. A generous pastry was topped with a layer of sticky sweet caramel, that in turn was topped with a rich chocolate fudge. A perfect quenelle of vanilla ice-cream was placed atop a sprinkling of gold soil, fit for a millionaire. While it was delicious, it was simply too much and I struggled to get through even half of it. Thankfully we had opted to share a second dessert, being a Prune and Tamarind Tart (circa 1730). This was by far the dessert I would go back for. A thin layer of tart prune and tamarind paste was spread atop perfect pastry, and then covered with a generous layer of creme, all sealed with hard brûlée that had a delightful hint of prune amidst the burnt caramel. It was simply delicious and something I’ll be dreaming about for many months to come.

To finish the meal, a complimentary amuse bouche of dark chocolate ganache with  a shortbread  fennel and caraway seeds was served. While the biscuit cut through some of the dense chocolate, it felt simply too much after the dessert we had just eaten. Perhaps a shot of soup to start the meal would have been a better touch here. It also meant that there was simply no room left for us to even contemplate the fresh ice cream that is made at the table, with the promise of all the theatrics that are trademark Blumenthal. 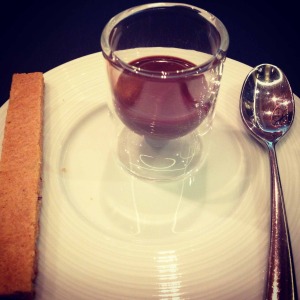 Overall, I felt the lunch was incredible value and something I would definitely go back for when next in London. Although I think next time I may have to make the trek out to the countryside to try his landmark restaurant The Fat Duck.