I finally made it to the Jaipur Literature Festival this year. It is apparently the largest free outdoor Lit Fest in the world, and certainly the largest one in India. I wasn’t sure what to expect, some people told me that it was an elitist event that wasn’t really for the average person.

Well yes and no.

The first session I attended was about “The Global Novel”, which had an international panel of writers including Jhumpa Lahiri, Jonathan Franzen, Jim Crace, Maaza Mengiste and Xialou Guo. I started groaning about 5 minutes in when Lahiri kept hammering the point that she didn’t like the word “Global”. It felt like a highbrow academic debate that didn’t really add much to my interest in the discussion. Thankfully she finally let the point go and the conversation moved onto more interesting issues, like how language and translation can impact access and understanding of writing. 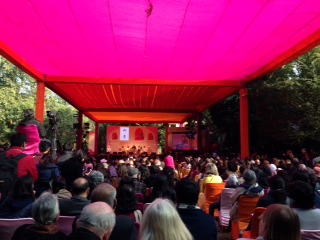 Next was a session on photography that was actually meant for children. This wasn’t well noted in the programme so the room was packed with eager adults and few children. It proved the point that language was a huge barrier, with the presenter speaking almost entirely in Hindi, so soon the room was interrupted as every non-Hindi speaker tried to exit. So far, the festival wasn’t off to a great start.

Thankfully, from there it picked up and I attended some fascinating sessions that included discussions on writing biographies and memoirs (something dear to my heart as I have started writing my own autobiography), Afghanistan and even Jesus Christ. The highlight would have to be the discussion on what will happen to Afghanistan now that was moderated by William Dalrymple. The discussion was interesting, entertaining and thankfully assumed that the listener was not an expert in middle east affairs, so what was discussed was actually explained well. This is what I had hoped from the festival and it delivered.

While I was there, I was invited to try a sneak preview of the new menu at the Samode Haveli, a boutique hotel in Jaipur. The Haveli itself is just spectacular, with frescoes adorning the walls that are over 200 years old. The new menu will be available later in the year, the hotel is currently just testing it out. It is based on home-cooking, based on handwritten recipes of the owner’s grandmother. It’s not your standard Rajasthani fare, but rather subtle flavours cooked in simple ways. From the smoked beans to the corn patties, and how could I forget the eggplant raita, everything was just superb. I am still dreaming of the delicate rose kheer!

The Lounge at Samode Haveli

So would I go again to the Jaipur Literature Festival? Yes definitely, although it was way too crowded and a lot of people appeared to be there to be seen more than to actually listen to the talks. Perhaps a small entrance fee would actually be an improvement. I also have to go back to Jaipur anyway to see the new menu at Samode Haveli when it is available, because I am still salivating at the thought of that delectable meal!