Sometimes when I’m sitting in front a computer for days on end I almost forget that feeling I get when I travel. The freedom, the challenge, the fear, the fascination, the sheer exhilaration. Sometimes I feel it all at the same time. Even when I’ve embarked on my next adventure, backpacking solo through undiscovered terrains, and I’m tired and my feet are hurting, there’s still something that keeps me going. No matter how bad it gets, the voice inside my head says “go travel”.

I felt this when I was travelling through Central America recently. I had a 32 hour journey ahead of me, that involved 3 countries, 2 border crossings and no pillow. While the thought of it made me feel a little tired, once I was in the moment all I could think was how I’d happily keep travelling for another 6 months… but perhaps with a good night’s sleep here and there. My Backpacking Mojo was in full force and I’d happily let it carry me anywhere.

My journey started  from Valladolid in Mexico, and my final destination was to be Flores in Guatemala. At 8am I set off from my Airbnb home, waiting for a bus to Tulum, an ancient Mayan fort. The two hour journey was uneventful, and arriving in Tulum my first task was to find somewhere to put my luggage. Thankfully the bus station had lockers for 100 pesos that were actually large enough to fit my ridiculously large pack. So 15 minutes later I was one my way to the ruins.

With 14 hours to kill, I was certainly in no rush. But I consider the ability to entertain oneself as a mandatory skill of the solo backpacker. So after spending about 2 hours of exploring the ruins, I had the luxury of being able to sit on a bench overlooking the ocean, observing the iguanas and just soaking in the atmosphere. It’s forced relaxation, the kind of thing that you just don’t get to do everyday at home.

With plenty of time on my hands, I decided to wander the 5kms back into town. Along the way I explored some local art shops, checked out the price of real estate in downtown Tulum (surprisingly quite reasonably price) and had the best fish taco I’ve ever had at a small street stall. These are the little things that inspire my spirit, making me want to travel slower over long periods of time. In my experience, having time to waste has always been the best way to find those hidden treasures. 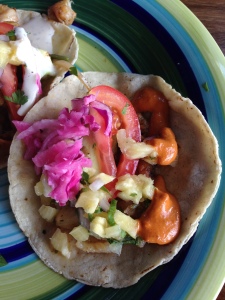 Back in town, with about 8 hours still left to kill, I pulled up a seat at a small street side bar. American Pie streamed from the speakers and the cerveza was chilled. It was the perfect place to pull out my laptop and catch up on some writing. With no other distractions, my mind was clear and creativity flowed. My mojo was in full force.

After a while, rather than force the words onto the page, like I would usually do at home when faced with a deadline, I just stopped. Took a sip of beer, and closed my computer. I chatted to the local bar owner, an American who had moved here 15 years earlier and now called Mexico home. She had chosen Tulum for its quiet pace, and blend of tourists. The steady stream of backpackers were feeding her mojo.

While I like hearing others experiences, for me the true joy is experiencing them on my own.  After a few more beers, and plenty more chapters on my Kindle, it was time to head on. At the ungodly hour of 12.45am, I was feeling worse for wear and starting to doubt my backpacking choices. But thankfully it was only a momentary lapse of reasoning, even when the lights went on a few hours later and we were directed off the bus to cross from Mexico into Belize.

After more than 50 countries and countless journeys, I still get a little flutter when my passport is stamped!

We arrived in Belize City early, and it was clearly a different country. I’ve never been to the West Indies, but this is how I imagine it is. The dulcet sound of Bob Marley filled the air and it felt like everyone had dreadlocks. Perhaps it was just around the bus station, or the time of day, but I no longer felt like I was in Central America. It was literally like waking up in a different world. After an hour staring at this view, my journey continued. 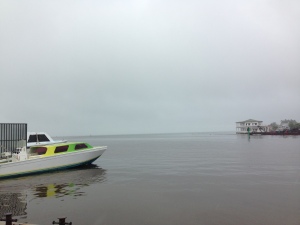 It was four hours to the Guatemalan border, and the journey through Belize was completely entertaining. People sat on their porches watching the traffic go by, while young kids played in their front garden. Living in India, I’d almost forgotten what people do when they have the luxury of space. The view from the window of this small van was mesmerising.

Another border crossing, this time we were required to walk across the border and meet our van on the other side. No luggage checks. No questions from immigration. It’s always amusing to me to see how much fuss, or lack thereof, countries make when you enter them. Here the attitude was as relaxed as the atmosphere I’d felt in Belize. But within two minutes of crossing the border into Guatemala it was clear we had changed countries.

The scenery was lush and people were busy working fields and getting on with daily life. It felt like we had returned to the Central America I’d seen in Mexico. And just like that my mood changed from one of relaxation to excitement.

After 32 hours, this mini-adventure was coming to an end, but another was beginning. The adventure that would be Guatemala. My backpacker mojo was ready for whatever this new country had to throw me. It was time. Time to go travel some more.

One thought on “The Backpacking Mojo”