It’s 4.30am and pitch black. I stumble to find the torch app on my phone, but finally manage to shed some light onto the path ahead of me. Before me is a jungle. The path is muddy and slippery, my slide stopped only by the thick tree roots that snake their way across the ground. In single file, our group of ten  walk one in front of the other, all eyes to the ground. I can see our guide walk past quickly in my peripheral vision, the butt of a rifle hanging from his shoulder. Immediately fear escalates inside me, why on earth does he need a gun?

A roar fills the air, but it’s not a giant cat or elephant. No. The sound is terrifying, yet oddly familiar at the same time. Like the Tyrannosaurus Rex in Jurassic Park. Perhaps that’s what the gun is for. In this remote land, perhaps dinosaurs roam. But this wasn’t Jurassic Park, this was Tikal. One of the greatest Mayan cities that ever was.

We continued in the dark for another hour, but thankfully my eyes had adjusted to the lack of light. Amidst the shadows I could see pyramids. They weren’t perfect but they were undeniably pyramid masses dotted along the path. Some had clear edges, others looked like pointed mounds. 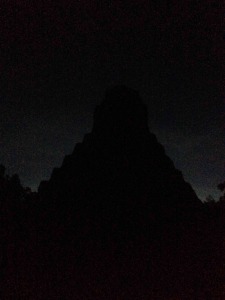 Morning View of the Pyramids

But there was no time to stop, we were on a mission. Finally we arrived at a newly constructed staircase and made our way silently upwards. The roars persisted, a sound that I’ve since discovered came from a monkey. Not a giant gorilla, but a little monkey. A howler monkey to be precise, an animal that provided voice to T-Rex in Spielberg’s classic films. The gun was apparently not for these little terrors, but rather the large cats that also inhabited this jungle.

The stairs led to the top of Temple IV, a large pyramid that looks over the jungle. In the distance the sun was trying to push through the fog, and the peaks of two pyramids could be seen. Over 1200 years ago this city was home to 100,000 people, but right now there were just 15 of us here. We sat in silence, in awe, for the next hour as the sky turned from grey to orange to pink.

Once day had broken through, we headed on our way to explore this vast city for the next few hours.

Tikal is an ancient Mayan city that covers 576 km2, it’s a vast expanse that can take days to explore properly. In fact, according to our guide a German tourist was lost inside the park for nearly three days before rangers managed to track him down. While the area is huge, less than 20% of the ruins have been excavated. Of those ruins that have been excavated, apparently UNESCO has limited how much of the individual ruin can be exposed to air. The buildings are made of limestone and risk being damaged if entirely exposed to the elements. Financial constraints have also meant that many of the sites may never be even partially excavated.

This in itself makes Tikal interesting to visit. As you walk around the terrain appears hilly, but in actual fact the small hills are ruins that have been reclaimed by the jungle. The mind boggles at what lies underneath. 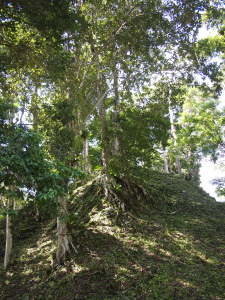 There are still many other ruins to see like the magnificent grand Square that is flanked by Temple I and Temple II on both sides. Temple II can be climbed from a set of newly built stairs, that let’s you get close enough to see the magnificent carved masks at the top. Temple I is no longer able to be climbed after a tourist fatally fell as they made the ascent.

The Masks of Temple II, Tikal

On either side are more ruins that give some insight into the daily life of the Mayans. But with so much underground, it’s so hard to really see the full wonder of their intellect. After all, the Maya lived so long they had created a word to describe 400 years. They built structures to live as long as they did. When you consider that Tikal was so huge, yet it did not have a natural source of water, clearly there was more to the way the Maya created cities than is seen from the ruins alone. They were scientists, philosophers and blood-letting worshipers who sacrificed humans. Chocolate (or Cacao) was their currency and it served them well for centuries.

It’s believed the Maya abandoned Tikal when the ecological impact of cutting down the surrounding trees caught up to them and dried out their water supply. The truth is, no one knows for sure why Tikal and Mayan civilisation in general disappeared.

Regardless, visiting Tikal is an extraordinary experience, and one not to be missed. Out of all the Mayan ruins I saw in Central America, including one of the new 7 Wonders of the World, Chichen Itza, Tikal is certainly the highlight. Even with the 3am start (from the nearby town of Flores)!

7 thoughts on “Tikal: The Jewel of the Maya”