I seem to spend so much of my time these days either at home working or going to the same places to meet friends, that I’d almost forgotten about the joy of discovering new places to visit in Mumbai. So one surprisingly sunny monsoon afternoon a friend and I decided to do just that.

We first headed to Khotachiwadi which is not too far from Girgaum Chowpatty Beach. Just off the busy main road we followed the street sign into Khotachiwadi  and entered another place in time. It has the feel of a sleepy old Portuguese fishing village, and while the Europeans may not live here their colour and architecture certainly shines through. The narrow lane ways are lined with modern murals that reflect the Christian heritage of the region and  beautiful bungalows. Portuguese style mosaics feature on the porches and colourful balustrades support the balconies. It took me back to Old Goa.

Mural in Khotachiwadi
From there we headed to the suburb of Mazagaon in search of some urban myths that we’d heard about. We wondered whether perhaps we had been taken on a ride after asking several locals if they knew of a Chinese temple and been greeted with a firm shake of the head. Then finally one nodded and set us in the right direction. The Chinese Temple is easy to miss, with just a Chinese symbol above the door and no one answering, I decided to risk it and walked in. My friend was a little more apprehensive, concerned that I’d ventured into someone’s home, but halfway up the staircase we knew we were in the right place when we saw these fellows. 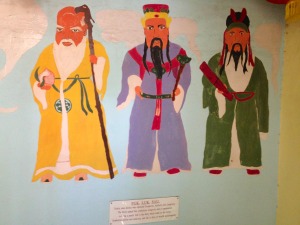 On the next floor was a small room coloured in vibrant red and with a shrine that glittered in gold. It was a peaceful place, where people could sit and pray, look out the window over the back streets of Mazagaon or chat to the caretakers. We did the latter, two middle aged men of Chinese origin told us about how they had a grown up near Borivali where there was apparently a reasonable Chinese population. This temple was originally built for the workers who passed through as they worked on the ports, travelling from China. Many eventually settled and moved further north, but the temple remained and is still lovingly cared for today. Downstairs was a smaller Buddhist temple, with handwritten scriptures, its walls could no doubt tell some stories. With generations now passing on or assimilating, I sadly wondered how much longer this treasure of a building will remain. 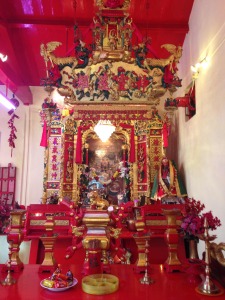 The next urban myth we’d heard about was of the Mumbai Taj Mahal. Once again we asked several locals who had no idea what we were talking about, but eventually we stumbled across Hasanabad. Through the rather nondescript fence and behind a friendly game of backyard cricket, in front of us lay a magnificent structure that certainly bore more than a passing resemblance to the most romantic building in the world. While the Hasanabad is not as a large or grand as Agra’s Taj Mahal, it is a lot quieter and well worth a visit. 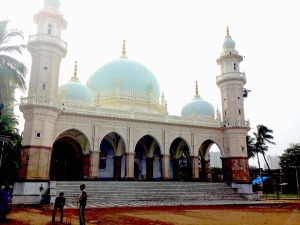 It is believed to be the resting place of Aga Khan I, Imam of the Nizari Ismaili sect of Shia Muslims. Given that it now seems to serve more purpose as the backdrop for a children’s play ground and place to sleep in the shade for adults, I do fear that this magnificent structure will also become another lost treasure in India. I’ve seen so many of them in my travels, I can’t comprehend how hard it must be just to keep track of them all, let alone maintain and preserve them.

We head out to the street to start the journey home, and I spoke a sign for a Mandir across the road. This visit was during Ganpathi, and the local region’s structure was set up there, so we popped in to pay our respects to Ganesha.  Like most other Ganpati idols I’ve seen, clearly the wealth of the surrounding village had been poured into making the structure as decadent as possible. This wasn’t just a place of worship though, on a Sunday afternoon it also seemed to be the place where locals congregated to chat about their week. Only a few days later, the Ganesha was immersed in the water and the structure pulled down and all the expense literally washed away. 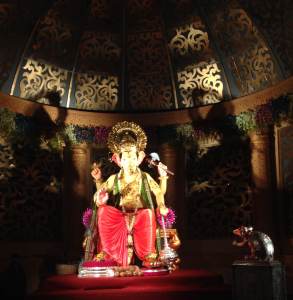 By now the heat of the afternoon had set in and it was time to seek refuge at home. But my quiet Sunday stroll has inspired me to remember to get out more and explore other hidden secrets around Mumbai.

5 thoughts on “Discovering New Places To Visit in Bombay: Mazagaon and Khotachiwadi”