One of the rather decadent pleasures of living in India is that you can find anyone to make almost anything you want. For me this has meant that I now have my favourite dress in 6 different colours, (all for cumulatively less than I paid for the original), and I have some rather special shoes that are tailor designed and made just for me. But what I’ve also found is that there are shoe makers and then there are shoe makers.

I was introduced to AKA Bespoke by a friend, who recommended them when I was looking for a good boot maker. While I wouldn’t dream of wearing boots in Bombay (except my trusty gum boots during monsoon), I do love wearing them when I’m visiting cooler climes and my old favourites had long worn out. So I visited Karan to see if he could help me create a pair of boots just for me.

Karan took a look at my rather worn out pair of boots, sketched around my bare feet and told me he’d give it a go, but to get the boots just right I’d need at least 2, maybe 3, fittings. He looked at me apprehensively as he explained this, I couldn’t quite work out why. It is such an indulgence for me to have anything tailor made, let alone handcrafted leather boots, I’d happily endure several fittings to get them just right.

The first stage of the process was to create a mock-up of the boots in another material, just to make sure that we had both the size, shape and design just right. This took a couple of fittings over about 3 weeks. 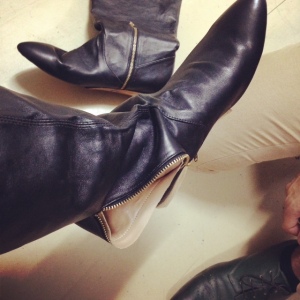 Once I was happy with everything, Karan then ordered the leather from Chennai and the final boots were made. They were made with the softest leather at my request and fit like a glove. There was no need to even wear them in, my shoes first outing was in Tokyo where I wore them for about 10 hours straight and didn’t get so much as a blister. The only glitch was that the leather I’d chosen was just a little too soft, and I found the toe and heel started to wear quite quickly. Upon returning to Bombay, I asked Karan to take a look, and like a professional he took them back, created a design with a more enduring leather that maintained the same look and fixed my boots at no additional charge. 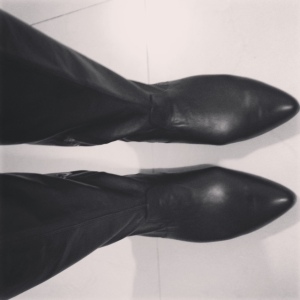 I love my boots so much, I thought it would be worth seeing if Karan could work his magic on some ballet slippers, as I’d found these to be so comfortable and also quite stylish (given that I don’t wear heels, I have to get some style with my footwear from somewhere). He advised that he’d never actually made them before, but knew I’d be willing to endure several fittings if required, so he agreed to trial the style with me. This time only one fitting was required and I had two pairs of shoes made, one black leather and one with a combination of red cloth and leather.

As we went through the first fitting and colour selection, Karan suggested a a leather plaited trim on the black shoes and just a little gold piping on the red. I’m rather averse to bling, except on rare occasions, but felt that I would trust him enough to try it. Thankfully, he got it just right and my new shoes took their first outing on the streets of London to rave reviews from my cousins. 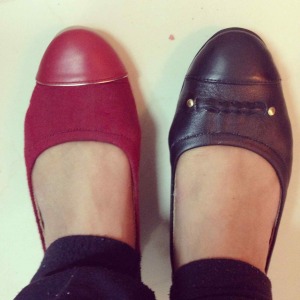 My only fear now, is that this could become a little bit addictive. I can feel an Imelda Marcos sized shoe obsession coming on.

Note: This review is my own personal opinion, no gratuity or payment was received for it.

2 thoughts on “My Shoe Addiction”