I spent a few days in the gorgeous city of Budapest many moons ago, when travelling to Eastern Europe was still considered to be a bit exotic. Like many who have visited Budapest,  I recall the beauty of the Danube and the magical atmosphere of the town.  But what I remember the most, are what at the time seemed like two of the strangest things to do in Budapest: 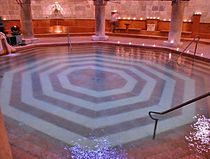 Yes, a Turkish bath doesn’t quite sound like a Budapest spa experience, but this was actually one of the most memorable things I did in this town, partly for all the wrong reasons!

There are actually quite a few Turkish baths in Hungary, some that date back to the 16th century, with many representing fine examples of Ottoman architecture. The one  I visited was just huge and had two separate sections, one for each gender. The gender segregation was necessary because this hamam was a nude one. I was travelling with two other girls and one guy at the time, and must say it was quite a confronting experience to take off all my clothes in front of my friends. Our male friend actually found the experience easier because he was in a room of complete strangers.

Once we got over our own modesty, we actually found the experience quite enjoyable. There is something liberating about wandering around a public place completely naked. This was a spectacular venue after all, with a huge open stone room, and a warm bath filled with natural thermal water. Art deco statues and mosaic tiles lined the pool room, and I could still feel the glory of its hey day.

There were hot stones to lay on, and I could almost feel the minerals soaking through your skin and releasing all the stress in my muscles.  This just made them more supple for my massage, that was firm and rejuvenating.  The whole experience was one of those that has stayed with me for almost twenty years. Even if you can’t bear the thought of walking around naked in front of complete strangers, do try and visit one of the baths, at least just to take a peak with your bathing suit on.

This delicacy was something we found in almost every restaurant or cafe we ate in. It was rich, chewy and just a little addictive. It is also one of the reasons I don’t think I can return to Hungary, I simply could not face the hamam again if I ate more of the fried cheese.

So if you go are visiting Budapest, may I suggest visiting the hamam, and then trying the fried cheese… preferably in that order.

4 thoughts on “Hamams and Cheese in Hungary”