I am asked a lot about where I went for my first solo adventure. For me it was back in 1998, and I visited the region of Sabah in Malaysia. To be honest I had never even heard of Sabah before I chose to go there.  It was a spur of the moment decision, I was just fitting in a holiday in between changing jobs. I didn’t give any thought to the fact that I would be travelling alone. I just picked something random that fit into the small space of time I had and looked interesting.

Sabah is located on the island of Borneo, and for me it was all about the wildlife. Borneo is home to those cuddly and almost human orangutans. At Sepilok Orangutan Sanctuary, these furry little friends are rescued and taken care of, with a view to being rehabilitated back into the wild. 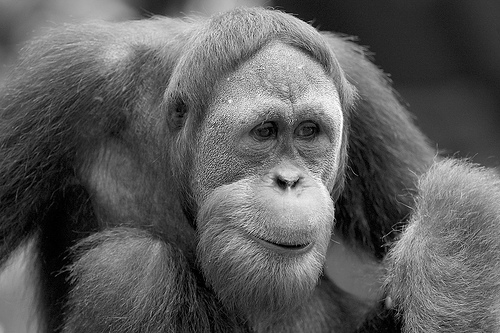 While you can’t touch the orangutans (for fear of passing on disease), they were certainly in close enough range to get a good look. I swear one looked just like an ex-boyfriend of mine!

After my visit to Sepilok I headed to the jungle in search of a more unusual primate, the proboscis monkey. I had booked a three day tour down the Kinabatangan River to explore the jungle. As luck would have it, no one else had booked this short tour, so I set out on my journey with my own private tour guide, private driver and private cook; just me and the three guys. As we set out for our river tour, I invited the driver and cook to join us on the boat. They had never had the opportunity to see the jungle like this before, so it was almost as fun for me to watch their reactions to the incredible landscape and wildlife as it was to see it myself.

Birds flitting between thick verdant surrounds, and in between there sat the elusive proboscis monkey. Looking like Gonzo from the Muppets, with a pot belly, this odd looking creature looked quite comfy sitting on a branch. Unlike their orangutan cousins, they didn’t seem concerned by us at all. 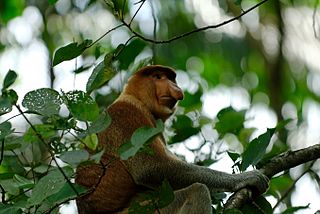 I just love primates (although the monkeys in India are so clever they terrify), so for me seeing these little creatures was a thrill. While they weren’t as cheeky as monkeys, they were just gorgeous.

Next stop was Turtle Island Reserve. The island is tiny and had basic accommodation for about 30 people at the time (I believe there is now room for 50 guests at a time). Green and Hawksbill Turtles come up to the shore in the evening to lay their eggs. We quietly were able to stand behind one of the turtles and watch the eggs being laid into the sand. It was incredible to be able to witness such a private moment in an animal’s life. Extra care was taken to ensure that the turtle was not disturbed or aware of what was going on behind them. The eggs were then collected by the conservationists, and put into special closed off areas so that they could nurture and grow without risk of predators.

We were also shown newly hatched turtles, and I was able to hold one. I turned it over, and it was so freshly hatched I could still see a faint semblance of the yolk on its belly. I took the turtle down to the sea and released it back into the ocean, so it could join the rest of it’s family. While I have since seen many turtle hatching reserves,  I have never been able to witness a turtle actually laying it’s eggs again.

For me, my first venture into travelling alone was spectacular. While I have had many other fantastic wildlife experiences since, this one holds a special place in my memories, as it was where I became a solo traveller.