I will let you into one of my not so favourite secrets. As I get older I am becoming more and more scared of heights. I don’t have an issue going up, but when I have to look down or try to walk down a steep incline, I become paralysed with fear. Only a few years ago in Egypt I went across Luxor in a hot air balloon, but now just the thought of it terrifies me.

I don’t know why this has happened to me, but it drives me nuts because it means I now miss out on some adventures that a younger me would have relished. Most recently it stopped me from paragliding.

I went with some friends for a short getaway from Mumbai to Kamshet, which is near Lonavla. My friends had arranged to stay at this lovely guesthouse Native Place which was just perfect. Our hosts Astrid and Sanjay created a private space, where guests can chill out, enjoy the serenity and relax. There’s a great vegie patch that’s still a work in progress, and a very promising fig tree that could have me heading back in the future for a little nugget of fresh sweetness.

They also run a paragliding business called Nirvana Adventures that trains pilots and also takes novices up in the sky for a tandem flight. While there was no way I would be capable of flying, I did go with the troops to watch them, even though it made me incredibly jealous. We went to the foot of a small hill and put up the wind marker. Soon all the neighbourhood kids started to wander over. They earned some pocket money helping Nirvana carry the gear up the mountain. 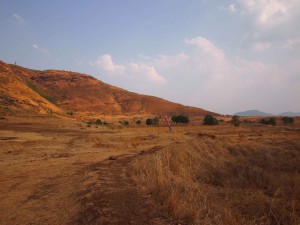 It was here that we found this little fellow just hanging onto the tree. 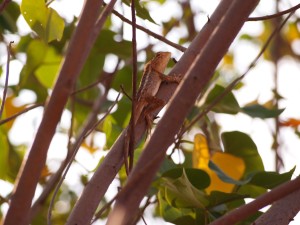 To actually launch the paragliders, you have to climb up to a ridge on the hill. I started the climb up, hoping to take some great photos as everyone took off. Unfortunately I only made it halfway up the hill. Part of the climb was a little steep and it left me frozen on the hill, unable to go up or down. Thankfully my kind friends helped me get down so I waited at the bottom of the hill for them.

After what felt like ages, I heard a loud scream and looked up to see my friend flying through the sky. She sounded like she was having a ball! It was mesmerising to watch them glide through the air, I certainly felt quite jealous that I couldn’t do that, but I was also grateful that my feet were firmly planted on the ground.

As I sat there watching them, a lovely old lady quietly sat down near me and put down a basket. She unwrapped a towel to reveal a huge tub of with piping hot vada and pav. Freshly made vada pav was her business, feeding all the kids and the gliders as they came down from their exhilarating experience. She had certainly found her niche, I’d go back just for her spicy, melt-in-the-mouth vadas!

If you’re interested in hearing what it was like to actually go paragliding, check out my friends article on it.