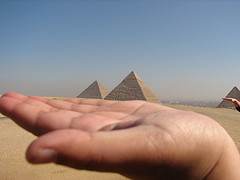 The Pyramids of Giza in My Hand

So last week I took myself on a fantastic trip down memory lane back to my favourite travel destination on earth, but next on the list just happens to be the only place in the world I have vowed never to return; Egypt.

I had always dreamed of travelling to Egypt, it is after all the land of the Pharaohs, the Great Pyramids, and Cleopatra, it must be a travellers dream. In recent years it has also been the subject of much media discussion about the treatment of women, for example it is a place where women were assaulted protesting against sexual assault. My experiences travelling in Egypt are some of my worst as a woman solo traveller, and that is why it is a place I will never return.

Taking a walk down the street, particularly in popular tourist areas, I was assaulted physically, verbally and through eye contact. It didn’t matter whether I was in crowded Cairo or relatively peacefully Luxor, the men in Egypt left very little to desire. Walking through the main bazaar in Cairo, it is crowded as to be expected. What I didn’t expect was to have hands coming at me from every direction possible, it was impossible to try and avoid it, so my only option was just to leave.

Men would yell out on the street, stare in a very unsavoury way or call out to grab my attention.  It was relentless, they wouldn’t just make a couple of attempts at contact and then leave you alone… no they would just keep going and going and going. The attention I got traveling alone in India was nothing compared to travels in Egypt.

Of course, it isn’t this type of behaviour that seems to impact tourism in Egypt, after all some of the most incredible places in the world exist here. The Great Pyramids are just something every traveller has to see, Abu Simbel was by far my favourite place, not only was it more peaceful, but it was also visually stunning. But that said, you have to travel in convoy to Abu Simbel for fear of being attacked by bandits.

Then of course there is Luxor. My favourite memory of Egypt (and unfortunately there are not too many), was waking up on a boat one morning, walking onto dry land, jumping on a donkey (yes a donkey) until we reached our hot air balloon, moving along the sky over the Valley of the Kings before being driven back into town and getting a train back to Cairo. I don’t think I have ever taken so many diverse forms of transport in a single day, and I doubt I will ever match it again (and unfortunately I don’t think you can travel by hot air balloon over Luxor anymore). 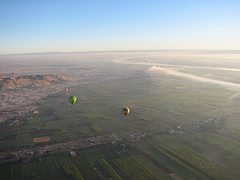 But of course back on the train the harassment starts again. Sigh!

I have travelled through many Middle Eastern countries and have always felt rather safe. A large part of Arabic culture is the separation of men and women, so in countries like Jordan, the UAE and Turkey I have found men tend to go out of their way not to come near me. They may stare, but its never in a way that makes me feel really uncomfortable, unlike Egypt, I don’t know what makes it so different.

What is more perplexing when you  travel in Egypt and learn more about the history of the country is how refined the Pharaohs seemed to be. So how did Egypt go from being a country that produced the intelligent and classy Pharaohs to one that is …well… producing the kind of men it is now? Like creationists can’t see the resemblance between man and ape, I can’t see how Pharaohs evolved into modern day Egyptian men.

I sure do feel sorry for the women of Egypt though. Whilst I have the choice to leave, they don’t. I admire those lovely women and give them all my strength, because they sure do need it.

36 thoughts on “The Worst Place in the World: Egypt”