I decided to take a little detour in San Francisco on my way from New York to Mexico. It wasn’t so much as a detour as a completely out of the way stop-over, but I felt it was worth it. I’ve got a client in Silicone Valley, so technically it was a business trip, but I also have a dear friend from Australia who I hadn’t seen since I packed it all in to move to India and in between they’d headed to join the tech boom in San Francisco. It had been too long between drinks.

The time difference between San Francisco and New York is only three hours, but between that and the flight I was completed knackered by the evening. Feeling a little sorry for my poor friend who was ready for a big night out on the town, I was unable to keep my eyes open past 9pm. Thankfully I was more spiritedly the next morning, so we decided to rent a car and head into wine country.

I don’t think it will be too much of a surprise to anyone who’s read this blog for a while to learn that I enjoy a glass of wine. I particularly love the cellar door experience, hearing about wines from their makers and of course tasting flights so that I can compare and decide my poison of choice. So a trip to the famed Napa and Sonoma Valley was a must-do for me. The wine region is a rather pleasant drive just over an hour from town. This is just the start of the region though and it takes at least another hour to get to the other side. We didn’t quite make it all the way this time, but we certainly had fun trying! 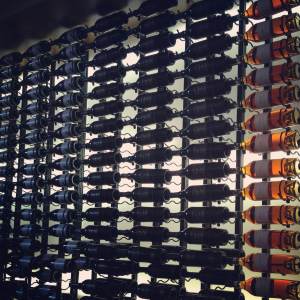 While my buddy had already been to quite a few of the wineries, we managed to sample some new ones this time. First stop was Etude Winery that specialises in Pinot Noir. Now I love a good Pinot, but wasn’t enthralled with the Napa ones. Don’t get me wrong, they were thoroughly enjoyable, and miles above the Nashik kind my long suffering palate has learned to endure in India, but it just didn’t compare to a great Australian wine. We got talking to our hostess, who seemed to like Australians (and I think she might have taken a fancy to my charming friend as well). I certainly wasn’t complaining as she was more than happy to let us sample some of the wines that were not included on their tasting list. This included a sensational and fruity New Zealand Pinot Noir that just made my palate sing, confirming that it’s well and truly wedded to the Southern hemisphere.

She was also kind enough to point us in the direction of some other smaller wineries to try along the way, including Whitehall Lane Winery. Once again we came across a very friendly host who was more than happy to pour us, (or me given that my friend was the designated driver), extra large tastings while he told us stories of his family and their travels across India. The wines were nice, but again there was nothing that enthralled me enough to purchase, but my friend certainly did.

Next stop was a quick one at Beringer Wine Estates, the grand old lady of the Napa Valley. This wasn’t a tasting visit but rather a sentimental one for me. I was working for Foster’s Group when they purchased Beringer and always felt a little disappointed that I never managed to visit the winery back then (as I worked in the Beer Division). It’s a large and beautiful estate, although there’s sadly a rather obvious lack of vineyards in the environs which kind of ruins the fantasy of sitting amidst the vines sipping a chilled glass of wine.

We certainly weren’t disappointed in this regard at Mumm Napa. Set on a beautiful estate overlooking vineyards that were glowing with autumnal shades of orange, red and green, we were faced with the daunting task of selecting just one glass of bubbles from the long list. It was a perfect end to a great day. Satiated (and with me now a little tipsy), we headed back over the Golden Gate bridge towards the big smoke. 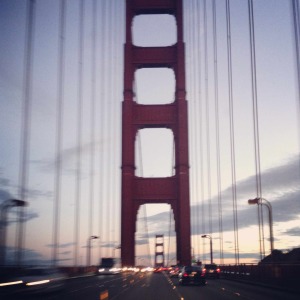 The next day was all about discovering San Francisco, starting with a walk through the town. We headed up along the rather steep cable car track to catch a glimpse of the bay area between skyscrapers, wandered through Little Italy and into China town before reaching the tourist bustle at Fisherman’s Wharf. We made a beeline straight for a wharf side restaurant for some San Francisco specialties; crab and clam chowder.

I must confess I’d never had clam chowder before and wasn’t quite sure what to expect. I was certainly surprised when a huge loaf of bread turned up on my plate, peeling away the crusty lid was a thick creamy blend with plump clams peppered throughout. It was certainly interesting, but a little bland for my taste so I’m not sure I’ll be in a hurry to have more chowder. On the other hand, the roasted crab with garlic was simply delicious. With bibs in place and fingers ready to crack through the hard shell, we demolished the dish in record time.

Heading back out onto the pier we saw a ferry that looked like it was headed somewhere soon, so we jumped on and found ourselves on the way to Oakland. The ferry ride was great, salt air rushed past and the view of the Bay Bridge and back across to San Francisco Pier alone made it well worth the diversion. Oakland is a port suburb over the Bay Bridge, it has a charming holiday vibe about it, but there isn’t a great deal to do there once you leave the port side. Going straight into holiday mode, we found a local bar that serves craft beer on tap and my friend took it upon themselves to give me a lesson in beer. I’ve never been much of a beer drinker, despite working for a brewery for over 7 years another lifetime ago, it’s only been in the last few years that I’ve taken to enjoying the occasional brew. My palate is far less developed for beer though, so I’ve now learned that wheat beers with less hops are probably more to my taste.  I’m not sure I’ll turn into a beer taster, but in the heat of the sun, a cool beer sure went down well.

The rest of my trip was a blur of good friends, great food and cool drinks. And oysters, lots and lots of oysters! It was really the perfect way to spend a chilled out weekend. My only regret is that I didn’t have more time to spend visiting San Francisco, I was just getting into it when it was time to leave. Thankfully this wasn’t the end though, but rather the beginning of another great adventure. 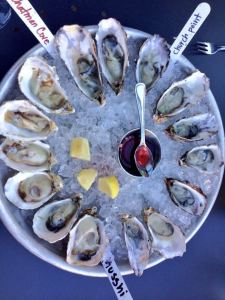 One thought on “Sun, Friends and Wine: Visiting San Francisco”