I’ve been to Baroda (or Vadodara) more times then I can remember as it is where some of my family lives, but I’m embarassed to say I’ve never visited the nearby UNESCO World Heritage Site of Champaner until now.  I did a fly by visit of Baroda last weekend and thanks to my own stupidity found myself there for a day longer than anticipated. So I used the extra day to visit Champaner. Unfortunately I found out too late that I was there just a day before the Big B (Amitabh Bachchan) was due to arrive to film a Gujarat Tourism advertisement.

Champaner was first built in the 8th century and became the capital of Gujarat in the 15th century for a short time. There are two main parts to the site. The ancient city of Champaner, which now has the remains of the city walls and some fabulous mosques, and the Pavagadh fort that is built on the mountain above.

Unfortunately, like so many treasured sites I see in India, this site is not being protected well. There were plenty of people sitting on the 1300 year old walls having their lunch, and even graffiti on some.

The first two masjids that we came past were almost deserted, which made them a pleasure to see. The stone carvings and exquisite detail on the buildings was unlike any I had seen elsewhere in India. These were built long before the famous Islamic buildings of the north like the Taj Mahal and the Red Fort of Delhi. While there are no signs of red sandstone or stark white marble and Italian inlaid stonework, you can still see incredible skill and beauty in the stone carvings. My personal favourites are the gorgeous carved windows, each square has been carved differently.

Columns of the Saher Ki Masjid

The masjids are also quite grand from a distance.

Unfortunately some of the mosques were not able to be visited because the roads were too difficult to get through. Narrow dirt roads that haven’t been looked after, means that some of these treasures feel like that they are being abandoned again, despite being given UNESCO protection. It’s quite sad.

To get up to the Pavagadh fort is quite an ordeal because of the Hindu Kali Temple that is located at the top. It’s a popular pilgrimage spot, which means there are hundreds of people clamouring their way up the mountain, especially on a Sunday which is when we went. We drove most of the way up the mountain, and then went to ca†ch the cable car (called Udan Khatola) up to the top of the mountain. What you’re not told as you purchase a ticket is that there is about a two hour wait in a crowded, cramped and very hot queue until you actually make it onto the cable. Once you realise, you are already trapped in the middle of hundreds of people with seemingly no way out. It reminded me of another horror temple visit in Haridwar and had me swearing never to go to a temple on a Sunday ever again.

Finally at the top of the mountain, it was not even possible to see the fort or the view properly, which was incredibly disappointing. Thankfully I managed to catch a good view on the cable car down, but I wouldn’t recommend going up that mountain to anyone who wasn’t religious. 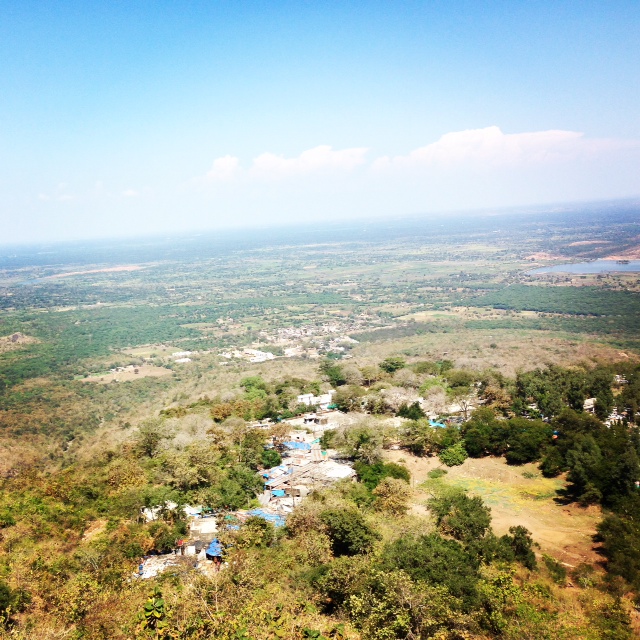 That said, the visit to Champaner was lovely, and a treasure that I hope won’t fall into obscurity and disrepair.