Delhi has been a like a base for me over the past 8 months, I have passed in and out several times and been lucky enough to see a lot of it with locals, experiencing the things they enjoy and discovering my own new ones as well. However its been over 10 years since I have seen the Delhi that the tourists see, visiting the major sites and marvelling at the feats of the Mughals in centuries past.  I am now no longer a solo-traveler, my friend arrived from Australia a few days ago and we are now travelling across Northern India together, first stop Delhi.

Tired and jet-lagged my friend chose to immerse herself head first into India so we set out for Old Delhi on a Sunday. We traveled by Metro, my preferred means of travel in Delhi:  its clean, quiet (at least in the ladies carriage) and quick, definitely the most civilised way to get around Delhi. Stepping out at Chandni Chowk Metro station we were smack bang in the middle of India.  Rickshaw drivers crowded us “guided tour of Old Delhi Madam, I take you everywhere”. We tried to move away from the crowd to  regroup, but it just seemed to follow us, so we relented and stepped onto Salim’s cycle rickshaw.  He had offered to take us through the sights of Old Delhi for the day, first stop being the Spice Market.

The market has lines of stalls with huge sacks of spices of all colours and variety lined along the entrance. The scent is overwhelming, with a blend of cardamom, cinnamon, tea, nutmeg, chilli and more filling my nostrils.  It smells the way I would imagine India should smell, strong and heady. We are led into a shop and the storekeeper starts throwing down sachets of spice mixes.  There are special blends for every Indian dish imaginable from biryani to tandoori to sambar powder. It makes me hungry, if only there was a little kitchen here to taste test all the  special recipes.

The next stop is the Jama Masjid, the largest mosque in India. To enter I  must first be re-dressed modestly in a polyester robe to ensure my arms and legs are fully covered. Upon entering the mosque, the first thing that strikes you is just how huge it is. The open forum can easily fill tens of thousands of people with imposing towers on each corner.  From the perimeter of the mosque you can see the red fort, built in a similar style but even more imposing than the mosque even from a distance. 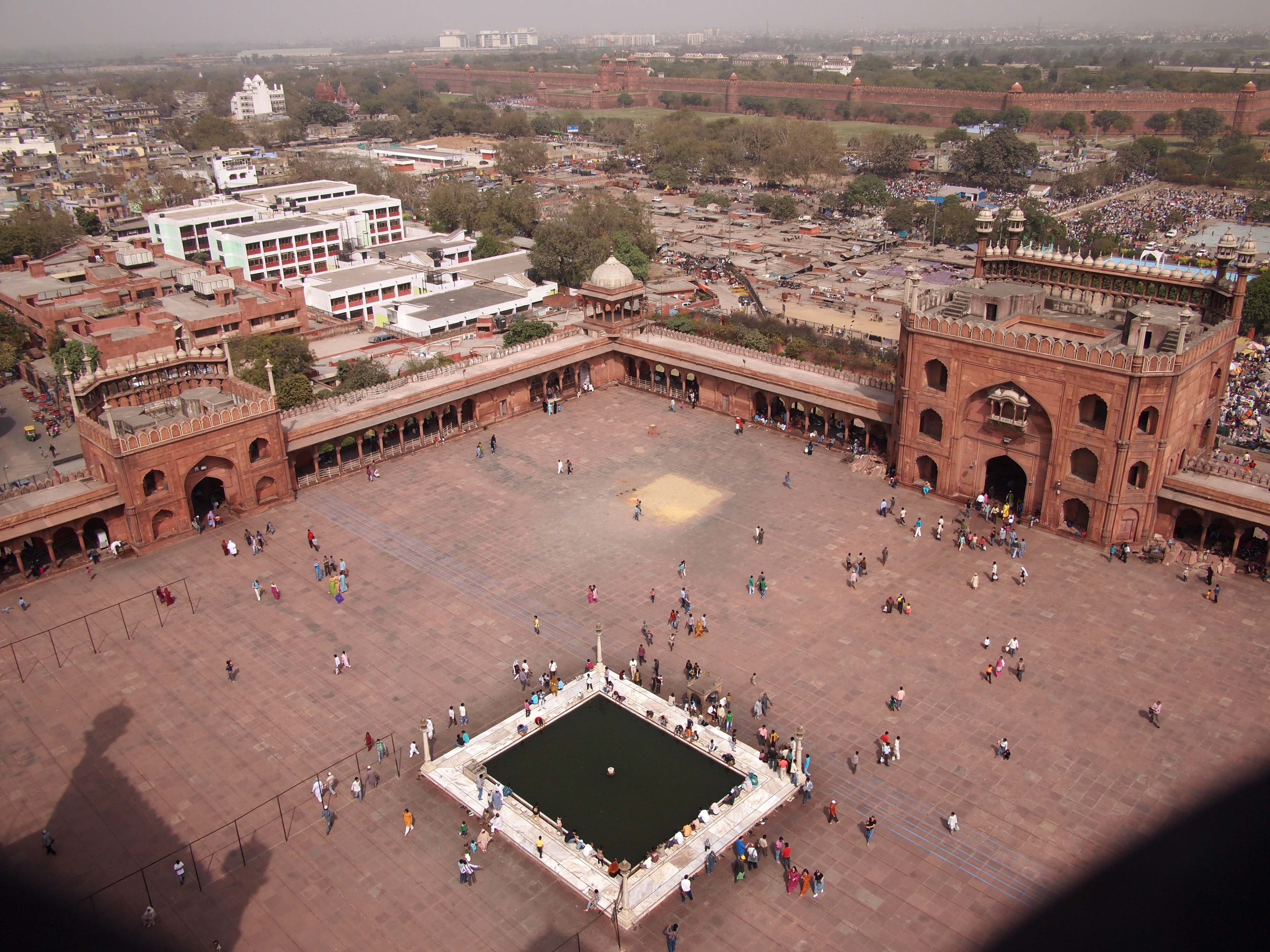 The Jama Masjid and View of the Red Fort

We climb to the top of one of the minarets to catch a view over the city.  It’s a narrow and steep winding staircase, with so many people climbing up and down it at the same time, a lot of the climb is spent hugging the walls trying to ensure that I don’t touch or am not touched inappropriately by anyone coming in the other direction. Upon reaching the top of the tower it becomes apparent that it is possibly to actually be even more crowded:  it’s a tiny space, perhaps 1.5m square and there are about 15 people all trying to peer out the open air windows to catch a glimpse of Delhi from above.  The view is lovely but the feeling is claustrophobic, and one bad step could mean tumbling down those steep stairs, so I endeavour to get out of there as quickly as I can. 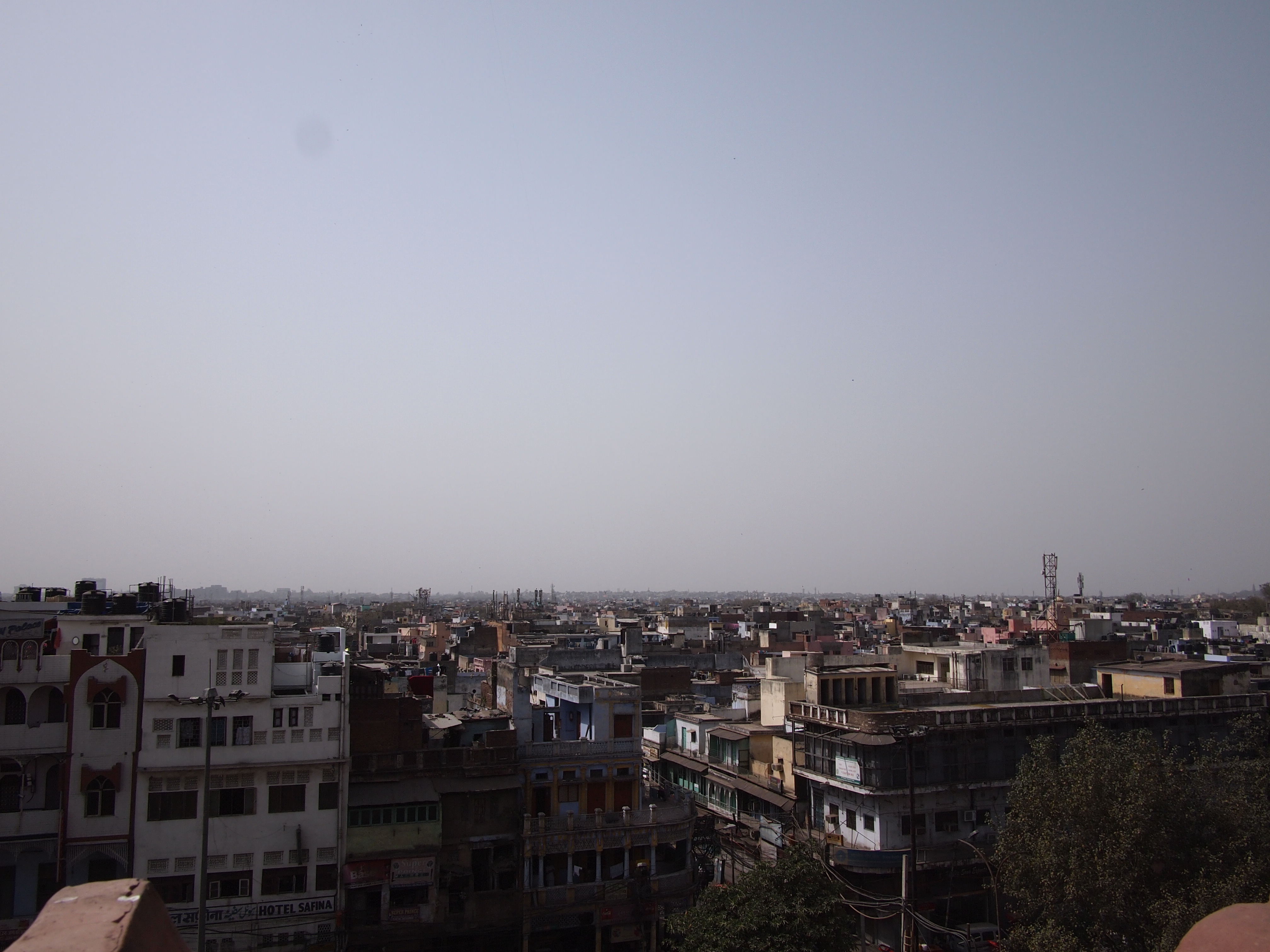 Next stop is the spectacular Lal Quila (Red Fort).  Its high walls stretch out wide protecting the Delhi of old from whatever intruders come its way.  Inside the fort is less spectacular, as different administrations have built rather ugly new buildings within its walls, detracting from what would have been brilliantly jewelled marble palaces and buildings in their time, however with a little imagination you can still see what this huge space would have been in its hey day. 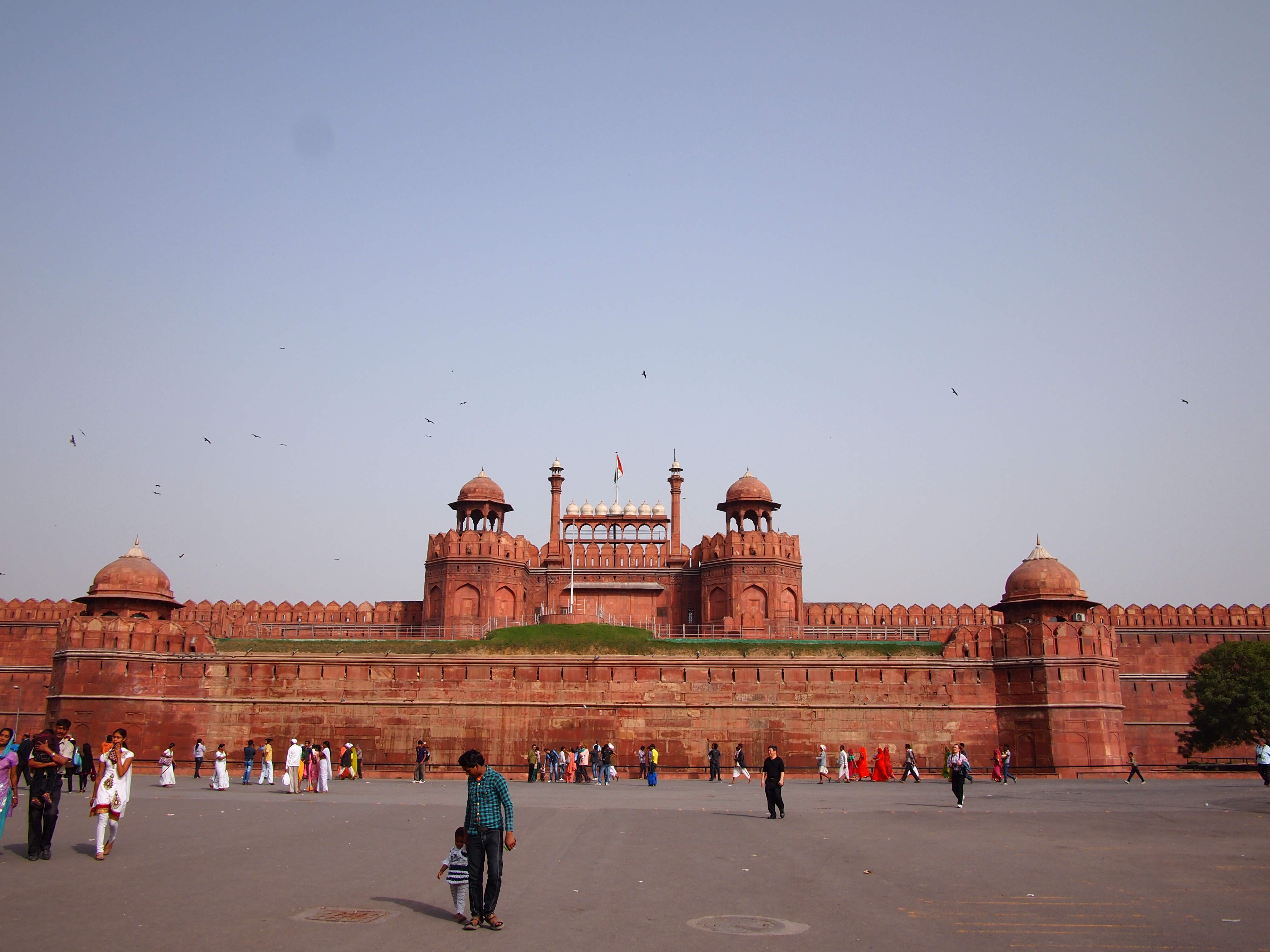 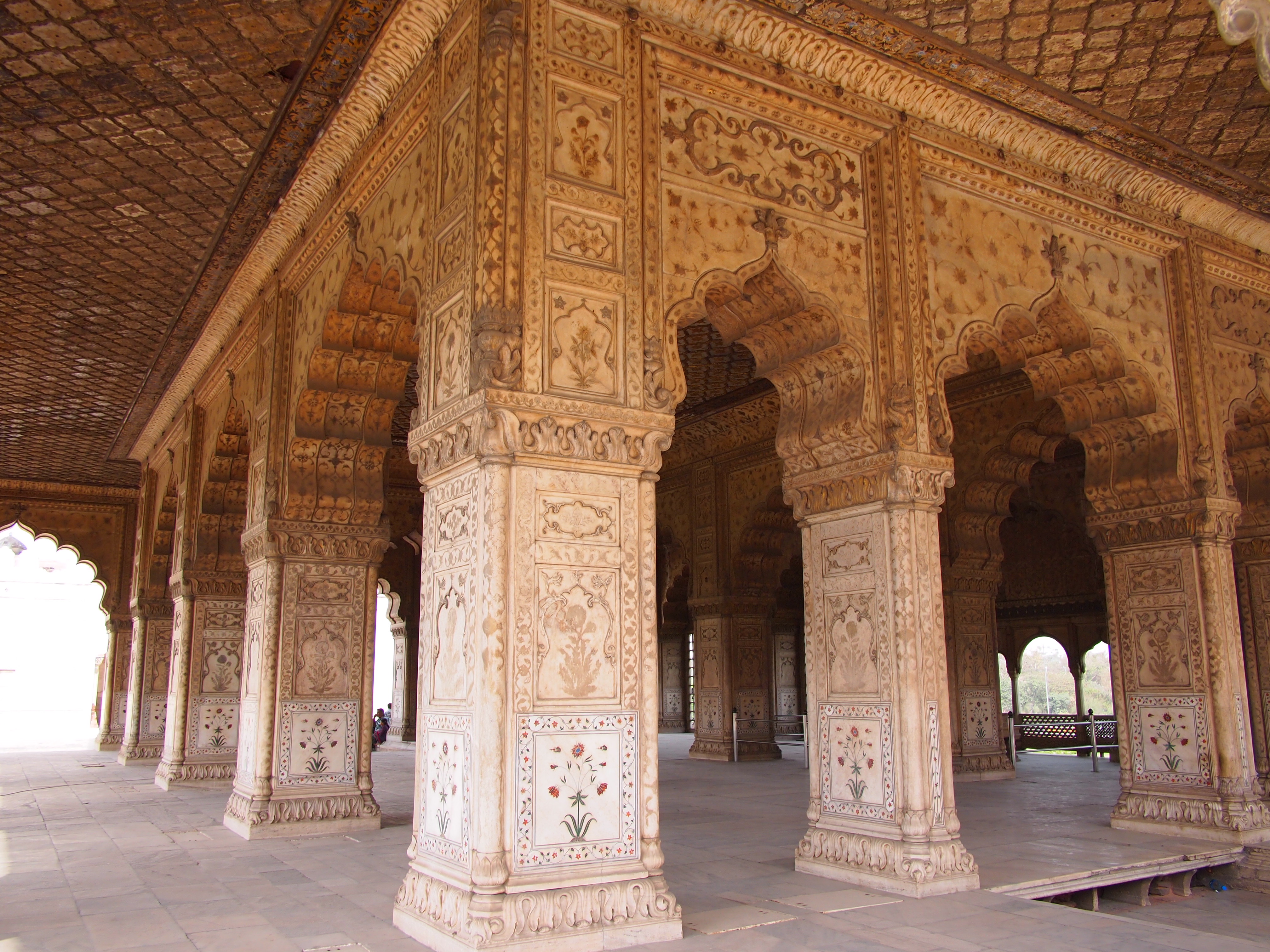 The once bejewelled palace

Our cycle rickshaw then took us for a ride through the bustling bazaars of old Delhi.  It’s not for the faint hearted, there are goats heads hanging from shop stalls, throngs of people everywhere trying to be heard as they go about their daily shopping, cars, auto rickshaws and motorcycles whizzing past us as we sit relatively vulnerable in the back of our small cycle. It is India, as incredible and crazy as she is.

Over the next couple of days we made our way through some more of the sights of Delhi, what seems to me now to be a city of Tombs.  Walking through the beautifully manicured Lodhi Gardens, an open garden space peppered with tombs of old, it is one of my favourite parts of Delhi, so peaceful and quiet, it’s clearly a place where young lovers come out to spend time together away from the prying eyes of family and neighbours. The Tombs are beautifully carved with the romantic arabic script still well-preserved after hundreds of years. 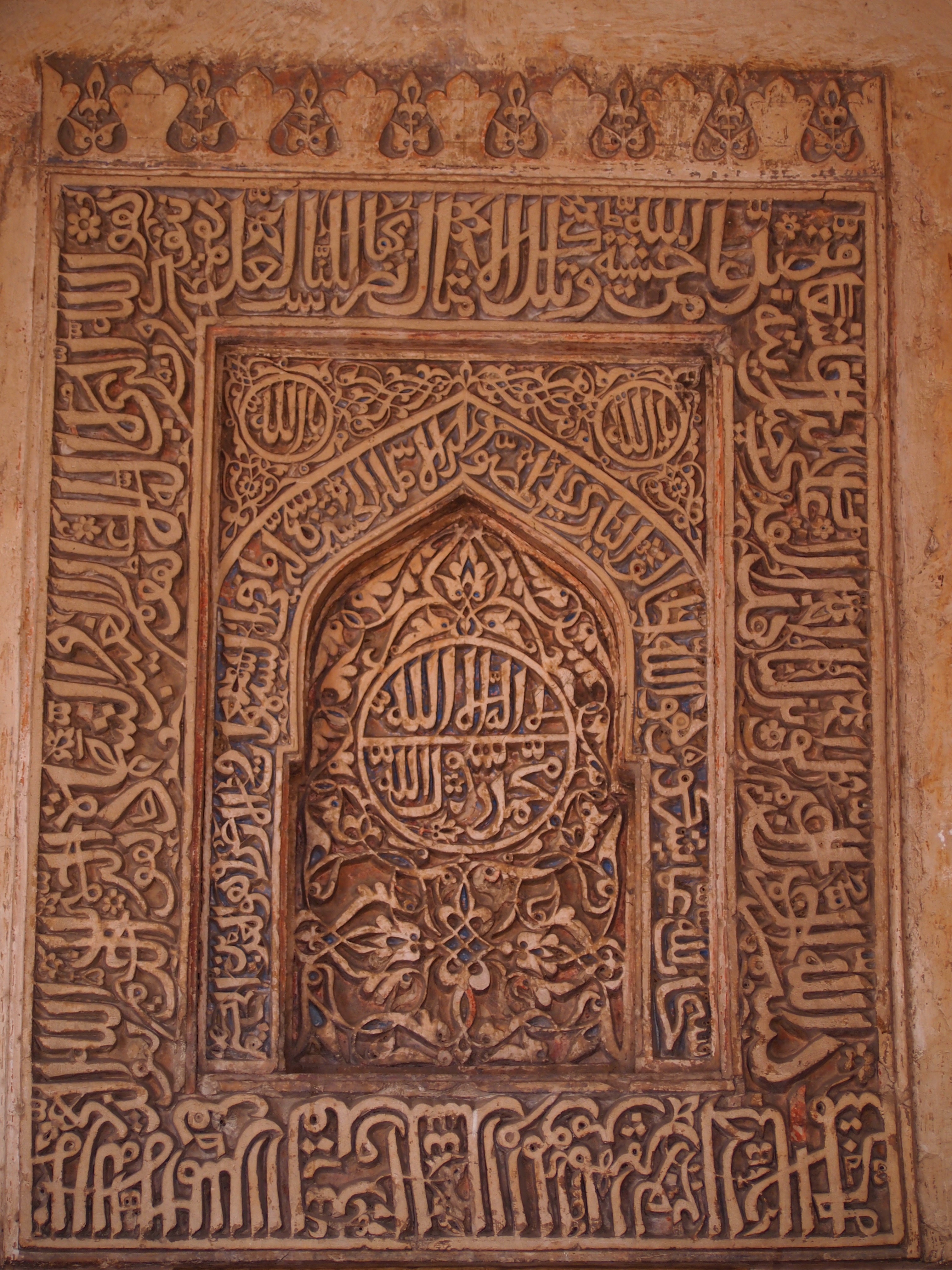 Humayun’s Tomb is the most spectacular tomb in Delhi. It is huge and well-preserved in red sandstone, with stars sparkling from its walls and gates. The tomb itself looks quite simple inside, but it is housed by a building that rivals the Taj Mahal in it size and awe. 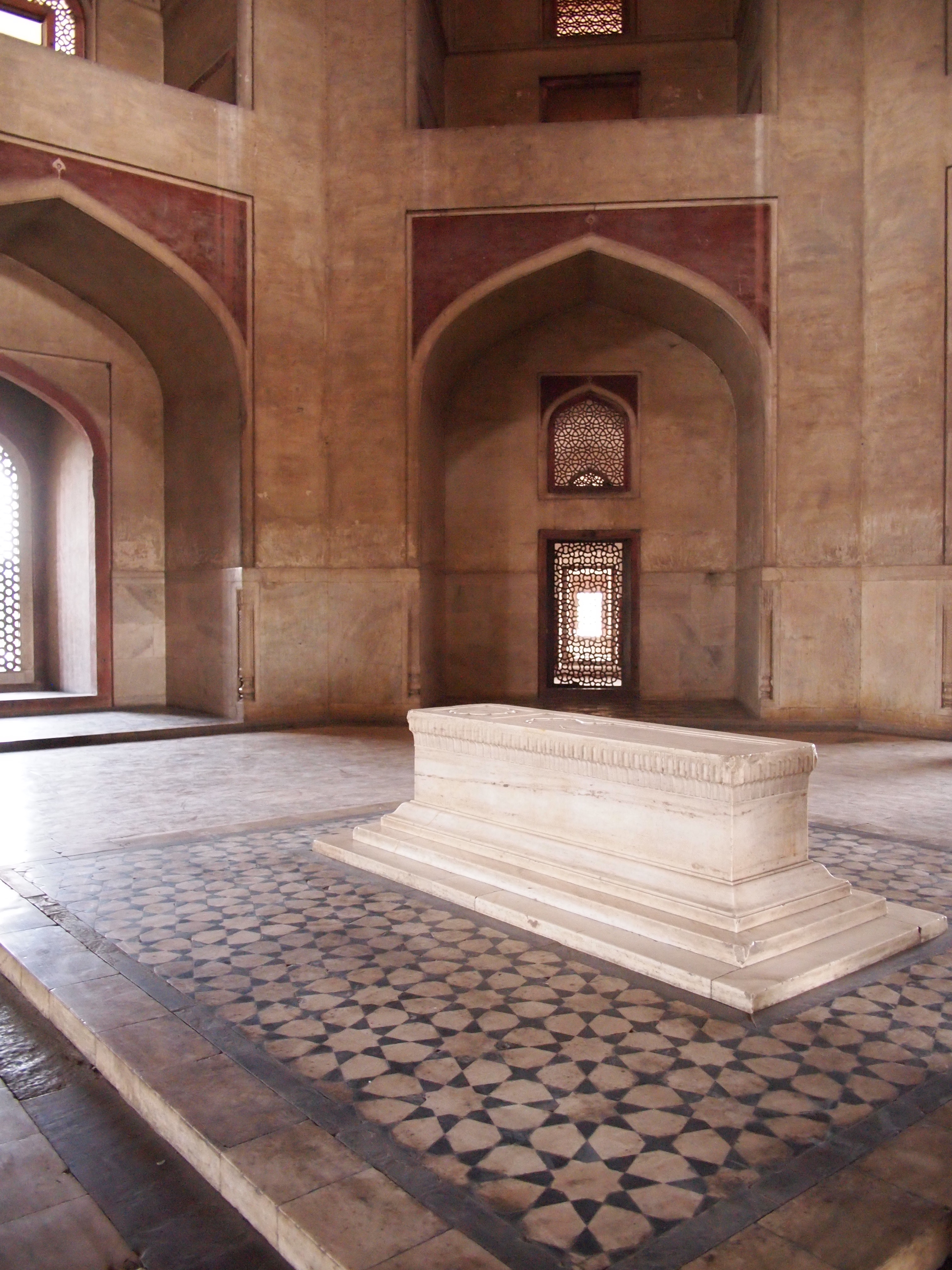 The Qutab Minar complex is a bit out of town, but is certainly worth visiting for its beautiful red structures and of course the awe-inspiring tower. It stands so tall, it is a miracle that it hasn’t been knocked down completely given the number of rulers that have come in and out over the last few centuries.

Of course no visit to Delhi is complete for me without seeing India Gate at night.  The night lights just seem to bring it to life and give it a new character. 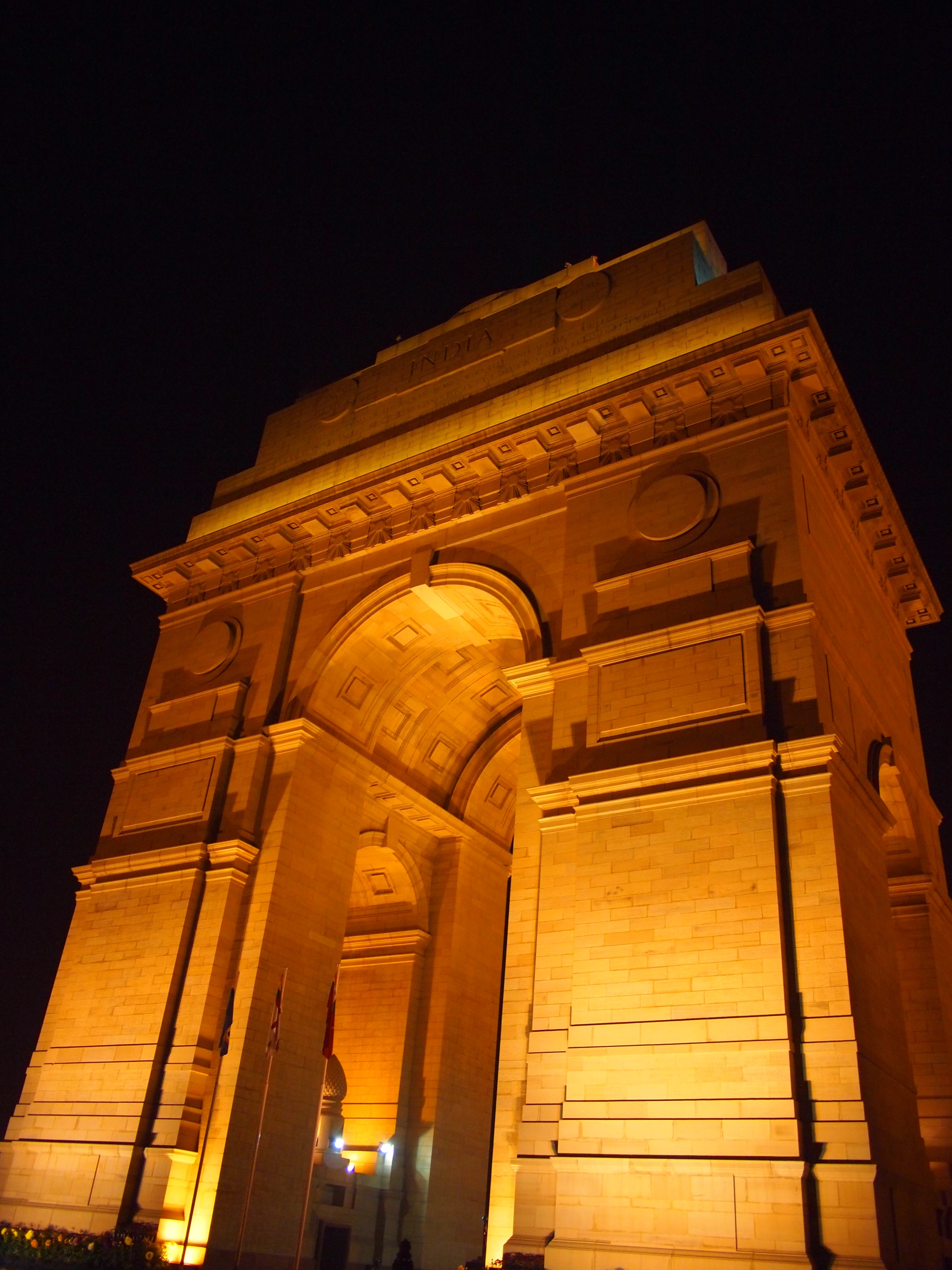 Seeing Delhi as a tourist reminded me just how much history and turmoil this old own has seen and how rich in culture it is.  It is a pity that no hindu structures of centuries past seem to have survive well in Delhi, but the city of tombs (as I now call it) is certainly one I have enjoyed.

5 thoughts on “Delhi as a Tourist”