I had always imagined Tokyo as a huge city of towering buildings and flashing neon signs. Something like this: 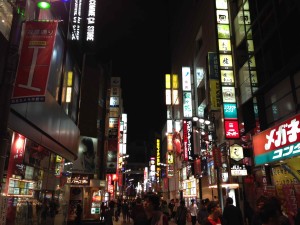 But now that I’ve seen Tokyo I would describe it as green, peaceful and almost European. I spent a few days just wandering through different parts of the city, and was just amazed at how calm, organised and really lovely it was. I never for a moment had that overwhelming feeling that can be so common in a huge city.

There were some areas in particular that really felt like they were European. Yanaka had small cafes, quaint shops and little alleys where we stumbled across hidden shrines and cute boutiques. Meguro with it’s interior design and furniture stores was quiet, and nearby Daikanyama was like a little Parisien alcove with most shop signs written in French rather than Japanese. Walking across the river from Senso-Ji to the Sky Tower, the promenade was full of beefcake men walking tiny dogs who were much better dressed than me, like this little fella.

Even wondering through the centre of the city in the middle of the working week felt like a leisurely stroll in a quiet part of town. Tokyo is by far the most serene metropolis I have ever seen.

There is of course the lights and big city feel that I expected, particularly in the dining and nightclub region of Shinjuku and around the railway station in Shibuya. But all in all, it felt like a quiet restrained city.

We visited the famed fish market of Tsukiji, the largest seafood market in the world. The market itself was fascinating, I just love looking at different types of animals trying to work out what they are, and of course the size of some of the tuna we saw was simply unbelievable.

On the Move at Tsukiji Market

Overall though it was rather disappointing (for other reasons that I detail here), and in true Japanese style there was no spruiking or calling at the market, it was almost a silent workplace with the tourists making much of the noise. The only thing that really made it feel like the kind of noisy markets I’m used to were these men speeding through the market on their little trolleys. They took no prisoners and could certainly cause some harm if you weren’t paying attention.

The European feel did extend to the fish market though, particularly in the small coffee shops around it, where everyone stopped for a quick burst of caffeine to wake them early in the morning hours. 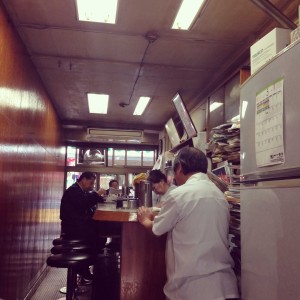 Senso-Ji Temple was just lovely, particularly on a Sunday afternoon as we could observe people all dolled up in their best clothes on family outings. 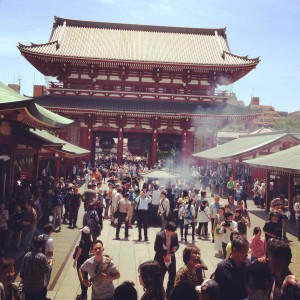 Senso-Ji on a Sunday Afternoon

We stopped by many other famous sites in Tokyo but they just didn’t thrill me as much as just wandering around the streets and soaking in the atmosphere. The Sky Tree Tower was just too much trouble, where we took a ticket that gave us the right to queue up again to buy a ticket in a couple of hours time. 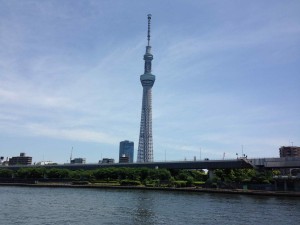 The new region of Daiba felt soulless and contrived, and what is with that faux Statue of Liberty? 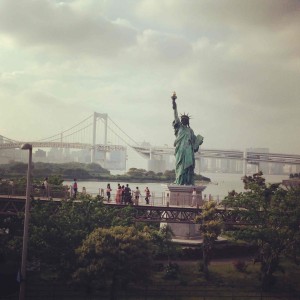 The gardens of the Imperial Palace were beautiful, and are well worth a visit if you’re seeking a bit of green serenity. But for me, my favourite thing to do in Tokyo was visiting Fabric Street. The area of Nippori is where the locals go to pick up sublime kimonos and left-over silks with striking designs. I could have spent a fortune there but managed to restrain myself and just picked up a few pieces that I’m hoping to turn into new outfits and wall hangings sometime soon.

Soon to be my new dress

Tokyo may not have been what I expected, but it certainly didn’t disappoint. I can’t wait to get back there and explore the city more.